I want to tell you about a fascinating movie I saw this weekend. 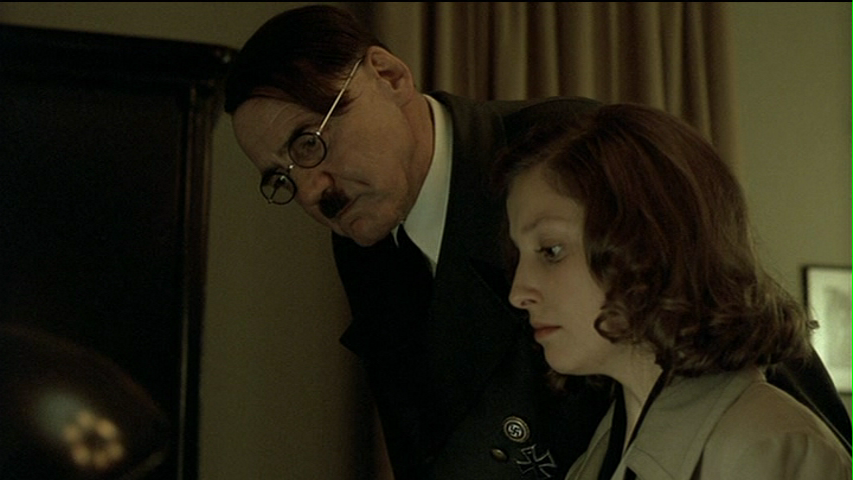 Downfall is the story of the last few days of the Third Reich, from Hitler’s withdrawal into his Berlin bunker to his suicide as the Russians closed in.

This is a story that has been told before, but Downfall has a sheen of realism that makes it utterly compelling. This is in no small part due to the way the film tells the story — not from the perspective of Hitler or one of his cronies or generals, but through the eyes of one of Hitler’s secretaries, Traudl Junge.

Junge was an ordinary young woman seeking a clerical job in 1942 Berlin when she was offered the position of private secretary to the Führer. Her acceptance brought her into Hitler’s inner circle, where she stayed right through to the end; Junge typed Hitler’s final testament before he killed himself in the bunker.

The movie does a fantastic job of portraying Hitler as Junge has described him: not as a psychopath, but rather as a man with a layer of gentleness on top, underneath which bubbles untold rage and anger. When he is pressed, the rage explodes volcanically to the surface. 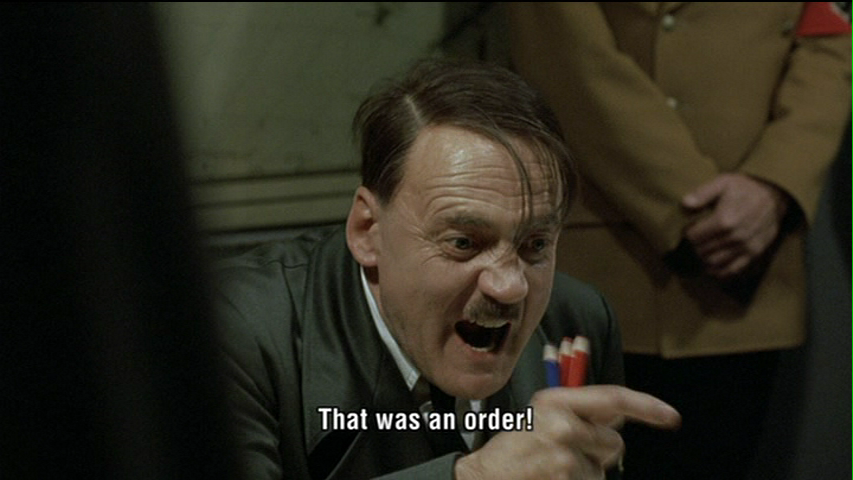 Much of the credit for the film’s compelling portrait of Hitler goes to actor Bruno Ganz. Ganz brings to Hitler a sort of grandfatherly warmth; it is easy to see why young Fraulein Junge would have found such a man likable. But when confronted with bad news — betrayal by a fellow Nazi, say, or simply another advance by the unstoppable Soviet war machine, which had been advancing non-stop for three years — he explodes, unleashing towering tirades against anybody and everybody in sight. Ganz even brings out Hitler’s inner menace in his quieter moments; see the scene over a dinner table in the bunker when Hitler and Joseph Goebbels (Ulrich Matthes) cheerfully discuss the Darwinian necessity of exterminating the defeated German people for their “weakness”, to Junge’s silent horror.

The film shows how this dual nature of the man — seeming sweetness combined with deeper ruthlessness — kept his authority over the Reich supreme even as it fell apart. Nobody in the inner circle could tell how to handle Hitler, and nobody wanted to be the one to call out his disconnection from reality; so they endured his rages long after any reasonable person would have turned on his heel and walked away. His personality was so forceful that they followed him even as Russian artillery rained down on their heads. 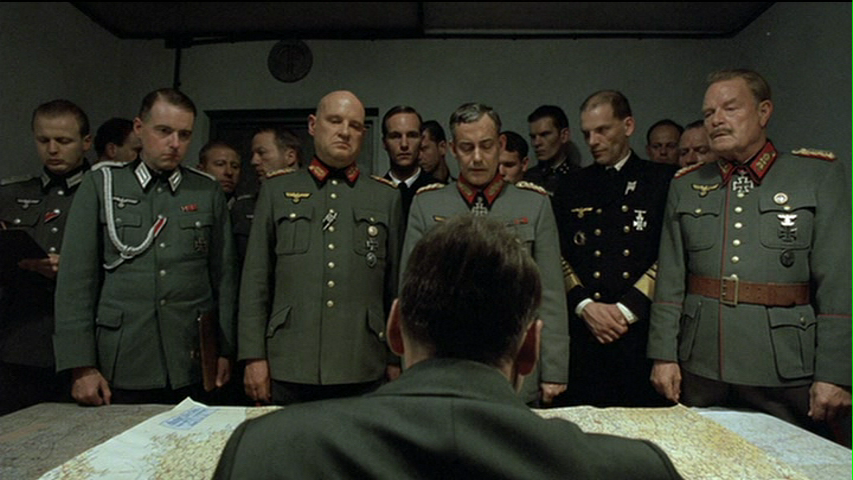 Ganz is not alone in giving a strong performance; the film is studded with them. One particularly notable one is by actress Juliane Köhler as Hitler’s lover, Eva Braun. 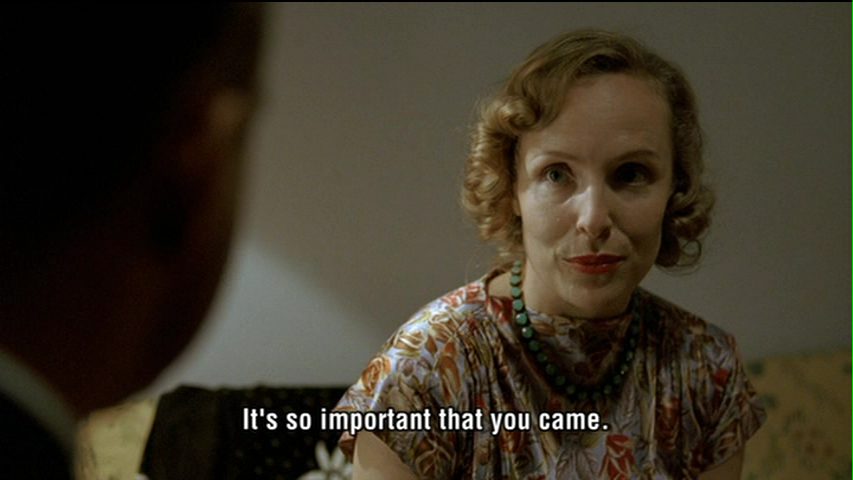 Most depictions of Hitler’s personal life depict Braun as a dumb girl, a simpleton for the Führer to amuse himself with. In contrast, Downfall’s portrait of the woman is richer and more nuanced than any I’ve ever seen. As played by Köhler, she is indeed vivacious and full of life, but underneath all that is a consciousness of the role that fate has placed her into. Her high spirits seem calculated in part to bolster the morale of those around her. Understanding that the end is approaching, she refuses to surrender to despair, or to flee from the lover who had dragged her into the abyss. Braun is not a sympathetic character — she has no problems with Hitler’s diatribes against Jews, or anyone else his crazed prejudices lead him to suspect. But while she is not sympathetic, she does seem to be more than an empty receptacle for Hitler’s twisted love, which says a lot about the power of Köhler’s performance. 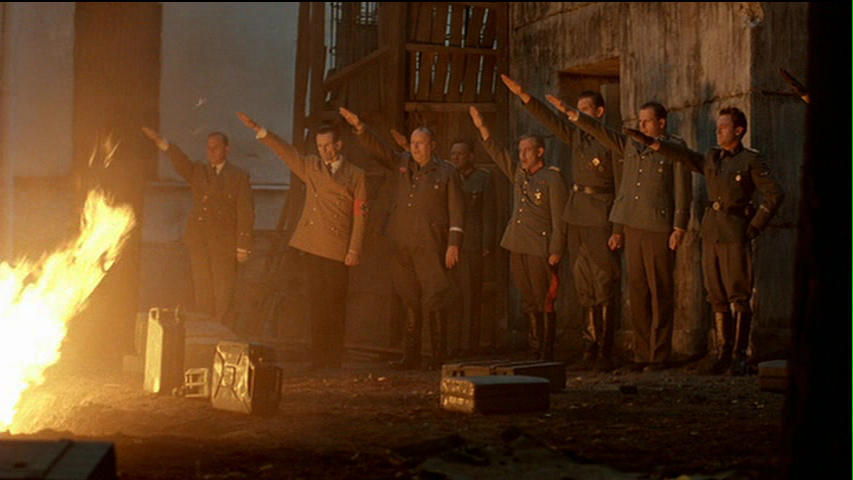 Those left behind salute the burning corpse of the Führer

I could go on about this movie, but I won’t. Suffice it to say that it’s a great movie and a real accomplishment — it is, after all, a story populated entirely by unsympathetic characters, confined to a few small rooms deep underground, and with an ending that everyone already knows going in. These are factors which usually translate to deadly dullness on the screen. And yet there is never a moment when Downfall is not completely alive and terribly compelling. It’s a fascinating portrait of a turning point in the history of the world. You should see it.

Is this movie already on DVD, or is it still playing in the theater?
Your overview makes it sound well worth checking out. Last night there was an hour long show on Discovery about Hitler’s health issues relating to his heart problems and drug abuse. I missed more than I caught, but what I did see was very interesting, as I was not aware of either of the problems.

It’s on DVD — I got the screen shots by grabbing ’em from the disc.
Hitler was a weird guy, health-wise. He was a lifelong vegetarian, for example, which doesn’t fit most people’s image of an insane dictator. He also had a personal doctor whose job was to keep him hopped up on happy pills — the guy was a quack, Nazi science at its best.