The Wisdom of Al Swearengen 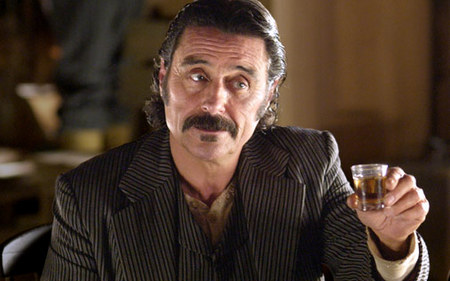 In life you have to do a lot of things you don’t fucking want to do. Many times, that’s what the fuck life is… one vile fucking task after another.

If I bleat when I speak, it’s because I’ve just been fleeced.

I’m declaring myself conductor of this meeting as I have the bribe sheet.

Announcing your plans is a good way to hear god laugh.

You want a donkey’s attention, you bring a fucking pole down between his ears.

Dan, don’t you agree that truth, if only a pinch, must season every falsehood, or else the palate fucking rebels?

How does Hearst hope to defeat me? Allied as I am with the imbecile, the contemptible, and the promiscuous fucking insane.

Over time, your quickness with a cocky rejoinder must have gotten you many punches in the face.

And my all time favorite, a dialogue between Swearengen and newspaper editor A.W. Merrick (Jeffrey Jones), after Merrick’s presses have been destroyed by local toughs upset by Merrick’s publication of a notice that existing gold claims might be thrown out if Deadwood is annexed to the U.S. Swearengen’s final line is a kind of mini-soliloquy that sums up his character perfectly:

Al: (Sits, lets out a sigh) Why ain’t you up and running again?

Merrick: I’m in despair. The physical damage is repairable, but the psychic wound may be permanent.

Al: (After a pause.) You ever been beaten, Merrick?

Merrick: (Rolls his eyes) Once, when I thought I had the smallpox, Doc Cochran slapped me in the face —

Merrick: Ah! (He stares at Al, touching his cheek — he leans forward) Stop it, Al.

Al: Are you dead?

Merrick: Well, (touches cheek) I’m in pain, but no, I’m obviously not dead.

Al: And obviously you didn’t fucking die when the Doc slapped you.

Al: So including last night, that’s three fucking damage incidents that didn’t kill you. Pain or damage don’t end the world, or despair, or fuckin’ beatings. The world ends when you’re dead. Until then, you got more punishment in store. Stand it like a man — and give some back.

(Many thanks to HBO’s episode guide, the Deadwood Transcripts site, and the quotes thread on Television Without Pity’s Deadwood forum for archiving all Al’s wisdom for posterity.)

Mr. Lefkowitz,
This is a heavily belated massage, only because I just ran into your blog from awhile back, concerning a certain Robert Isenberg and his “spiritual war” – a fellow who, for reasons of nomenclature alone, I’ve found very interesting. Your remarks were very well-conceived and I couldn’t agree with them more. You can imagine that a name like Robert Isenberg doesn’t pop up the much, and I was shocked (while admittedly Googling my own name) to discover one such RI with precisely the opposite politics of my own, loudly rancoring in the wake of his son’s horrific death. Whatever this other Robert Isenberg may think of your commentary, I felt pleased and enlightened.
Ciao,
R.I.

“In life you have to do a lot of things you don’t fucking want to do. Many times, that’s what the fuck life is: one vile fucking task after another.”
I think I’m going to adopt that as my personal credo.

I like the line about God laughing when we making plans… how true that is. I swear nothing in my life has gone the way I planned it. So I stopped trying.
The counter-offer line is good, too. 🙂

The “god laughs” line is actually a paraphrase of an old Yiddish saying (pardon my abominable spelling of it): “Mensch tracht, Gott lacht”. In English that means “Man plans, God laughs.”

thanks for complying the wisdom of Mr.Swearengen! The show is amazing and Al, well, Al is the uncle I never had.

My Favorite
Wu( sitting in Al’s office after his opium has been stolen)
Al: Now, the—this—this is one of you, huh?
Mr. Wu: (phonically, again â€“ sorry!) Hough, Tong yun n tong yun (karate chop and slit across throat)
Al: Oh, theâ€”this is him dead?
Mr. Wu: Au. Hoâ€¦Heyan.
Al: And these two.
Mr. Wu: Bok Gwai Loâ€¦cocksucka!
Al: Yeah, glad I taught you that fuckinâ€™ word. These are whites, huh?
Mr. Wu: uh, white cocksucka! (Pulls out dope bag)
Al: Two white cocksuckers killed him and stole the dope that he was bringing to you.
Mr. Wu: White cocksucka! You, Sweâ€™gen (gestures to the bag and Al)
Al: The dope that you were gonna fuckinâ€™ sell to me?
Mr. Wu: White cocksucka.
Al: These two white cocksuckers? Who the fuck did it?
Mr. Wu: Wu!
Al: Who, you ignorant fuckinâ€™ chink!
Mr. Wu: Wu?!
Al: Who?! Who?! Who stole the fucking dope?!
Mr. Wu: Cocksucka!
Al: Aw, Jesus.

“Tell your God to ready for blood.” is another good one.

What could any one of us every really fucking hope for, huh? Except a moment here and there with a person doesn’t want to rob, steal or murder us. At night, or mayhap sun-up one perched against the fucking wall, the other mayhap on the fucking bed, trusting each other enough to tell half the fucking truth. Everybody needs that, it becomes precious to them….
Al Swaerengen

“whoa,whoa,whoa, you gotta stagecoach to catch? huh? Slow the F down huh?”

“Whatever lurks ahead of grievous abominations and disorder, you and me walk into it together, like always.” That’s my favorite–it reminds me of my husband! 🙂

Every fuckin beatin I’m grateful for. Every last one of em. You get all the trust beat outta ya, and ya know what the world is.

I authored the below script on 21 April, 2005, wherein, here, Al has been transported to 2005 and given the opportunity to sell his own vocal ringtones upon mobile phones, as he addresses the Gem’s staff to go out and get paying subscribers to his service. If you project out to now, 2013, the same speech applies to Gem smart phone apps …

“That mobile contraption wherein mere mortal morons will pay hard gold to listen to the melancholy ring of cocksucking miscreants has taken me to the angel inhabited latitude of doubting my own sanctimonious generosity for those constipated boot licking peons who patronize the Gem’s fine fare of liquor, tables and whores. Take haste, you unintelligible low lifes from Beelzebub’s domain in my union’s employ and bring me a sucker’s template so I may also partake in circumcising the penis of wealth growing from the groins of these eunuchs and feast upon their foreskins of treasure that they will happily replenish, on a monthly basis, for my God-anointed treasure chest . . . ah, the Jews, THE JEWS are my salvation to bring such old testament booty to me . . . their cunning ways, tricksters of long nose and accounts. They, and they alone, will geographically enrich and enlighten me as if I were the lost tribe if I play their game of commercial fleecing and fucking through a sheet! Peaches . . . peaches for the Jews!”

This was in the comments from a Deadwood vid on YouTube…what season/episode was it from?

I feel the contempt of shallow men washing over me with each word. The very essence of their lack of virtue is as translucent to me﻿ as the morning dew as it comes to rest and glistens in the sunlight that shines upon me. With God’s grace upon me shall the language of Deadwood descend upon me and transfer me to that place where those who revel in verbal savagery relish in the magic of wordplay for those who cannot understand it or grasp the comprehension of it and revel in it’s magical delight.