I know I’m a little late to the party on this, but I finally got a chance to see Peter Jackson’s 2005 remake of King Kong the other day.

Generally speaking, it was an OK flick; the visuals were impressive, but it was a little too long and too convinced of its own impressiveness for me to give it an unreserved recommendation. The one thing that really struck me about it, though, wasn’t the giant CGI ape or the big action set pieces. It was how deeply in love Peter Jackson’s camera was with Naomi Watts, who played the Fay Wray role of the ingénue who is swept off her feet by the mighty Kong. 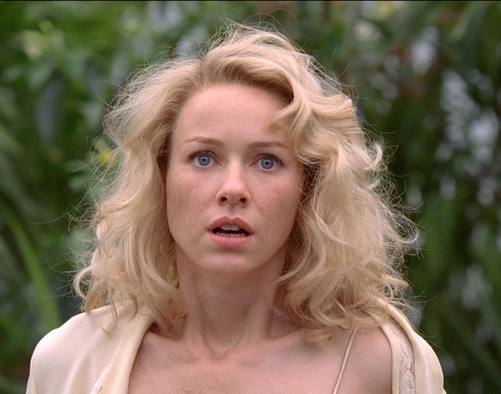 The great French director Jean-Luc Godard once famously observed that "the history of cinema is the history of boys photographing girls", and I’m hard pressed to think of a modern film that more vividly illustrates Godard’s point than Jackson’s Kong does. The film seems to shift down into a different gear whenever Watts appears on screen; while most of the other scenes are played at a frantic pace, the camera lingers over Watts, contemplating her most minute features, in a manner that’s hard to describe as anything other than voyeuristic. The fact that Watts spends 90% of her screen time draped in diaphanous gowns that cling to her like Saran Wrap only makes the point clearer.

Now don’t get me wrong, I’m not complaining — there’s many worse things you could do with three hours of film than spend it photographing hot women in clingy gowns. (If you need a list, ask George Lucas, he’s full of ’em.) It’s striking, though, how much of what we’re supposed to be impressed with from Kong seems so wan and by-the-numbers compared to the scenes with Watts. The action sequences, which seem to aim for new levels of popcorn-movie spectacle, left me bored; they felt contrived and obligatory, with no heart or passion. But whenever Watts came into the frame, the mood would change, the camera pushing aside everything else to focus in on its muse, the loud action-movie soundtrack of explosions and crashes quieting to a whisper.

I’m not sure if this was intentional on Jackson’s part or not, if he was aiming to treat Watts with the same reverence that the screen goddesses of the ’20s and ’30s got from their directors, or if he just loved the way she looked on screen. But does it really matter either way?

I was surprised, looking over the reviews at Rotten Tomatoes, how few reviewers noted this aspect of the film when it was released; most waxed rhapsodic instead about the CGI and the action sequences. Maybe if you saw it on a big screen, those elements could more easily overwhelm you. But on the home screen, they feel a tad overcooked, at least to me; the few quiet moments the film allows itself carried more power for me than all the rock-’em-sock-’em sequences combined.

So is Jackson’s Kong worth seeing? You could do worse. Just be prepared for a movie that feels anachronistic, no matter how much CGI whiz-bangery is layered on top of it.