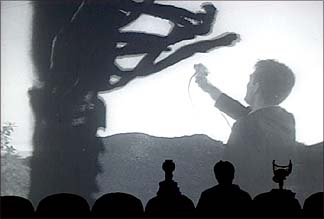 If you were going to try and identify a work of art that truly captured the zeitgeist of the 1990s, you’d be hard pressed to find anything better than Mystery Science Theater 3000, the long-running cable comedy show in which the performers heckled bad movies. It was a kind of meta-entertainment, which took amusements that seemed tired and clichéd to our modern eyes and made them new again by overlaying them with a healthy dose of snark. In other words, it was the perfect program for a nation that was embarking on a decade in which everything was steeped in irony and surrounded by air quotes. (Some people say that era ended on 9/11. Me, I wish it had.)

MST3k is long gone and done with, but it still has fans, including me. At the end of each episode, they told us to “keep circulating the tapes”, and we did; and then the DVDs, and then the digital archive files. But in the bottom of our hearts, there was always that quiet wish for something new from the Satellite of Love. Sure, the various performers went their separate ways and worked on their separate projects, but none of that ever really seemed to capture the spark they had together (Mike Nelson’s books probably come closest).

Which is why it’s exciting to say that the gang has gotten back together! Well, several of them, at any rate: Mike Nelson, Bill Corbett and Kevin Murphy have come together as “The Film Crew“. The fruits of this reunion? Next week will see their first DVD hit the streets — a DVD which features them mocking a bad B-movie, Hollywood After Dark. From the looks of it, it’s MST minus the robot puppets and the silhouettes; which is fine by me, since it’s not like anyone watched MST for the production values. We watched for the writing, and the wit of the team. Anything that brings that back is worth watching, in my book.

(Oh, and I should probably mention Mike Nelson’s RiffTrax here, too.  RiffTrax provides downloadable MST-style commentary tracks for today’s movies, performed by Nelson and his cohorts, occasionally including other MST alumni. I’m told they’re pretty good, but I haven’t tried them myself. Anyone out there who has, feel free to chime in with your impressions in the comments.)