In honor of Memorial Day, three stories of heroism and sacrifice.

The first is the story of a group of my personal heroes: the Seabees. 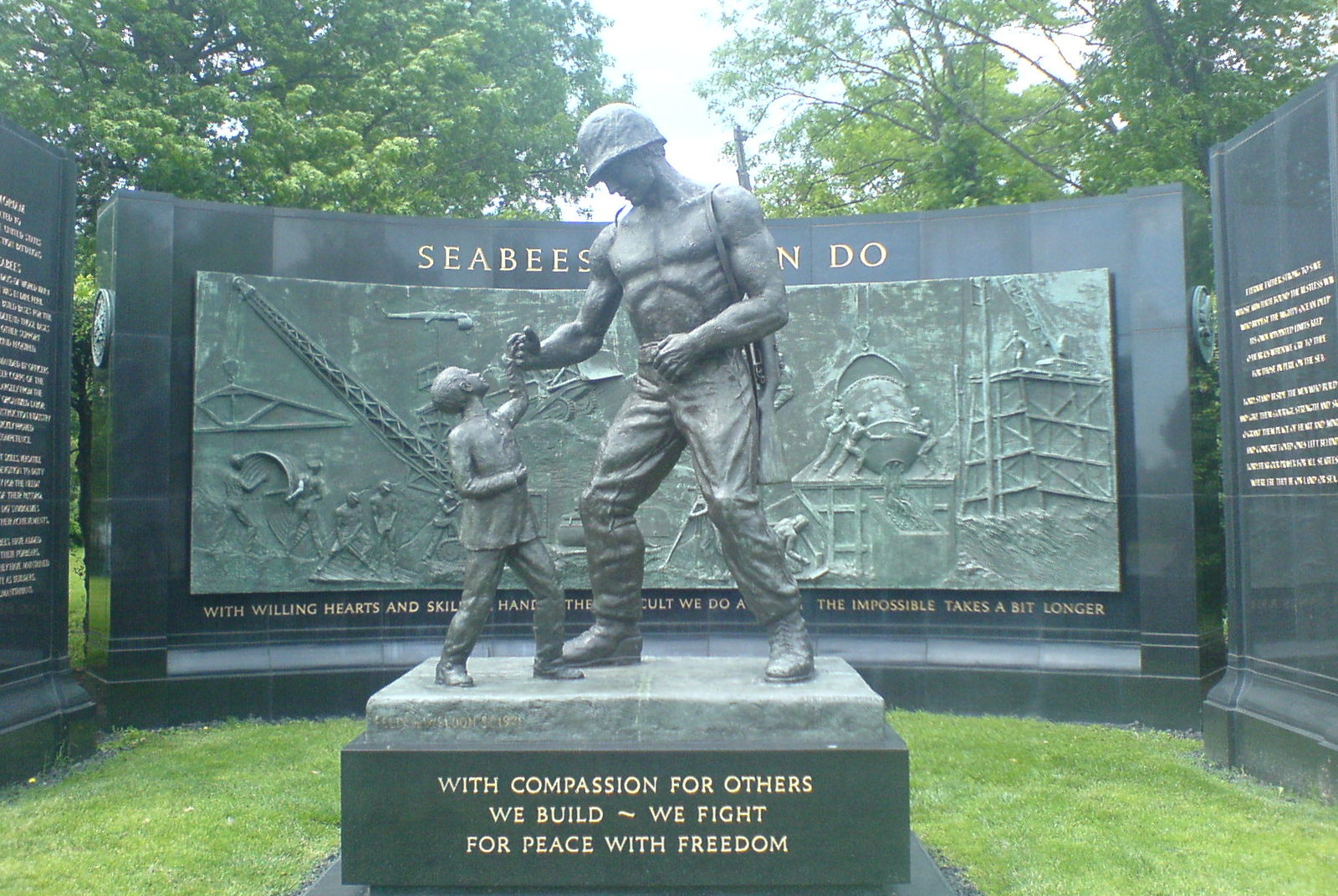 When World War II broke out, the U.S. was faced with the daunting prospect of pushing Imperial Japan back across thousands of miles of Pacific Ocean. To make that possible would require an extensive network of ports, airfields, supply depots, bridges, roads, and other facilities that, simply put, did not exist.

The men who were charged with creating those facilities were the Seabees. Officially designated the Navy’s Construction Battalions (“C-Bs”, get it?), the Seabees were recruited from the building and construction trades; skill and experience were emphasized over youth, so Seabee units filled with skilled tradesmen who had built the great skyscrapers, dams and roads of New Deal America.

They spent the next four years fighting their way across Europe and the Pacific — but unlike most fighting men, the Seabees’ first mission was to build rather than to destroy. Sometimes they were called upon to do that building even while the fighting still raged around them. During the Battle of Guadalcanal, the Marines fought desperately to hold on to their one airstrip — Henderson Field — in the face of ferocious Japanese attempts to seize it or knock it out. As Japanese bombs fell, the Seabees’ job was to patch the bomb holes in the airstrip so that the Marine fighters of the Cactus Air Force could take off and defend the island. They pulled it off; Henderson survived and became the linchpin of the Allied victory in Guadalcanal.

At other times, Seabees took a more direct role in the fighting:

It was during the landing on Treasury Island in the Solomons, on 28 November 1943, that Fireman 1st Class Aurelio Tassone, USNR, of the 87th Naval Construction Battalion created that legendary figure of the Seabee astride his bulldozer rolling over enemy positions. Tassone was driving his bulldozer ashore during the landing when Lieutenant Charles E. Turnbull, CEC, USNR, told him a Japanese pillbox was holding up the advance from the beach. Tassone drove his dozer toward the pillbox, using the blade as a shield, while Lieutenant Turnbull provided covering fire with his carbine. Under continuous heavy fire, Tassone crushed the pillbox with the dozer blade, killing all 12 of its occupants. For this act Tassone was awarded the Silver Star.

Seabees fought with distinction in the European Theater as well; for example, among the first men to wade into the hell of the Normandy beaches were Seabees charged with clearing a way through the Germans’ beach obstructions so the rest of the landing force could make it through.

It takes a special kind of courage to face an armed enemy when you can’t carry a weapon and shoot back. For the Seabees, though, this kind of courage was an everyday thing. By war’s end, the Pacific alone saw more than 2,000 Seabees awarded the Purple Heart for being injured by enemy fire.

The Seabees earned a reputation for coolness in the face of incredible adversity. Their unofficial motto was “Can Do” — a testament to the way they took on any and all challenges that came their way. Another common Seabee saying was that “the difficult we do at once; the impossible takes a bit longer.”

Today, just outside the entrance to Arlington National Cemetery, the Seabees Memorial (pictured above) stands in remembrance of their valor. And also today, in Iraq and Afghanistan, the Seabees are still hard at work.

Speaking of Arlington Cemetery, the second story involves how that facility — the place where America’s best and bravest find their eternal rest — came to be.

Before the Civil War, there was no Arlington Cemetery. Instead, there was Arlington House — a mansion that served as the residence for one of Virginia’s most prominent families. And as civil war loomed, the head of that family was generally considered to be the finest fighting man in the United States — Colonel Robert E. Lee.

Lee had led a distinguished career in the U.S. Army and was widely considered to be on the fast track to eventually become the Army’s commanding general. The outbreak of civil war, however, put Lee in a terrible position; he considered himself a loyal citizen of the United States, but his home state, Virginia, had chosen to leave the Union and join the fledgling Southern Confederacy. As the rebellion spread, an offer was made by the Federal government to put Lee in charge of all U.S. armies; but Lee felt he could not take up arms against his home state, so he resigned his commission and went to offer his services to Confederate Virginia. As Lee left Arlington House, Federal troops swept in and occupied the property to prevent it from being used to lob shells into Washington.

Jump ahead now three years, from 1861 to 1864. The war that everyone had thought would be quick and bloodless had descended into a nightmarish slaughter. Hundreds of thousands of soldiers on both sides had lost their lives. The flow of casualties from the battlefields so overwhelmed the Union that all the national cemeteries had been filled. The government began to look for new sites that could be commandeered and turned into cemeteries to ensure that the honored dead could be laid to rest.

One man who was charged with finding these sites was the Quartermaster General of the U.S. Army, a widely respected military engineer named Montgomery Meigs. Meigs had been born in Georgia, but unlike Lee, he had chosen to stay loyal to the United States; by choosing rebellion, Meigs felt, Lee had dishonored himself and his family.

When the request came in to identify new burial grounds for Union dead, then, Meigs had a suggestion readily at hand. The Union had seized Lee’s picturesque mansion, with its hundreds of acres of manicured grounds. Let it then punish Lee’s treason by burying its dead right on his property — turning his ancestral home into a graveyard, and making it unfit for Lee and his family to ever occupy again.

The proposal was approved, and by August 1864, Union dead were being buried in Mrs. Lee’s rose garden. By the end of the war, nearly 20,000 Union soldiers had been laid to rest there.

Meigs’ plan played out just as he’d intended; Lee never returned to Arlington House again. Since the home had been his family seat for more than sixty years, Lee felt its loss keenly. However, Meigs’ success at denying Lee a return to his home did not come without a price for himself as well; in October 1864, Meigs’ son, who was also serving in the Union Army, was killed in battle in Virginia. Perhaps fittingly, Meigs’ son became one of those 20,000 dead soldiers laid to rest in the garden of the Confederacy’s greatest champion.

The last story is a story of heroism from Iraq, on December 4, 2006, when a young soldier from Pennsylvania, Specialist Ross A. McGinnis, was faced with a terrible choice:

On December 4th, 2006, McGinnis was on patrol with a convoy, manning the .50-caliber machine gun on his [Humvee]. During a surprise attack on a narrow side street, a fragmentation grenade was thrown into the vehicle. According to the official report, McGinnis yelled “Grenade” over the intercom and tried to deflect it, but it made it inside the vehicle.

Spc. McGinnis found himself in a hero’s moment. Seated in the turret atop the vehicle, he could have jumped free before the blast. Instead, he pressed his back over the grenade to shield his fellow soldiers. When the grenade detonated, his body absorbed the lethal blast, saving the lives of every other man in the vehicle.

Sergeant First Class Cedric Thomas was in the HMMWV that day. “We didn’t have a chance to get out,” he said. “The doors were too heavy and some were combat locked. We couldn’t get out.” McGinnis’ warning came through the intercom, followed by the sound of his breathing into the open mic. Thomas recounted seeing McGinnis stand up, sit down, and then lean back into position over the grenade.

On May 24, it was announced that for his sacrifice, Specialist McGinnis would receive the nation’s highest military decoration: the Medal of Honor. He is only the fourth soldier to receive this decoration for bravery under fire in Iraq.

I include his story as a reminder on this Memorial Day that heroes and sacrifice are not just found in history books.

thanks Jason. I hate this war, but the people fighting it are truly amazing.

Thank you for posting the story of Aureilo Tassone. He is my grandfather and i miss him very much. It makes me proud to know what he and all our service members present and passed including myself will do for the country we love.