When The Revolution Comes

It’s a bit disorienting to see a revolution you were being prepared to survive when you were 10 years old come roaring to life when you’re 35.  Even if you’re 5,000 miles away when it happens. 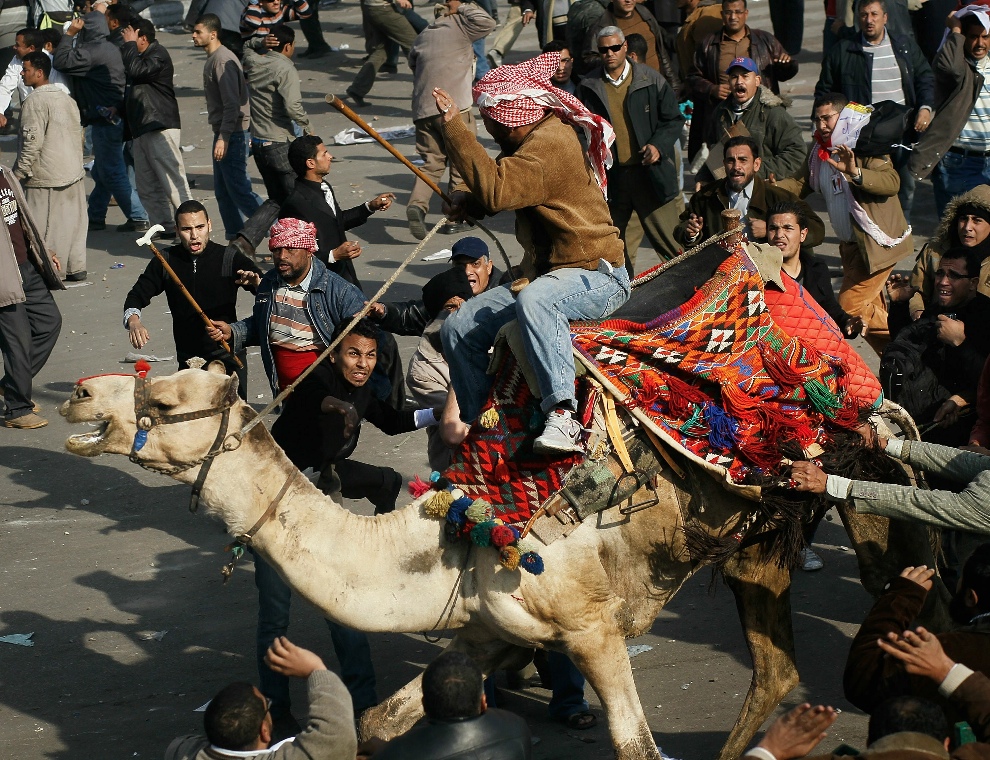 But that’s what the last week has been like for me as the people of Egypt have risen up to depose the man who has been their President for the last three decades, Hosni Mubarak.  Because this is a revolution I’ve been half expecting and half fearing since I was a child.

I was born in Ohio, and live in Virginia today, but for several years in the 1980s, I lived in Cairo.  My father made his career working for the U.S. Air Force, and in the early ’80s, Uncle Sam needed him in Egypt as part of the big post-Camp David Accords effort to re-engineer the Egyptian military — newly won over from the Soviet sphere of influence to that of the U.S. — into a Western-style force, equipped with American weapons and following American doctrine.  So off we went. And for the next three years and change, I was a Cairene.

It was one of the best experiences of my life, and I one I still look back on with fondness.  Egypt is a fascinating place, with a modern culture as rich as its ancient heritage.  Living there gave me the chance to meet amazing people, both from Egypt and from other countries all over the world.  My time there broadened me as a human being.  One of my dreams is to someday go back.

But all of that makes it sound a bit like a vacation, and that’s misleading.  Because even though I was just a kid, it was clear to me that being an American in the Middle East was a dangerous thing — even in a city as cosmopolitan as Cairo.

Like I said above, it was the early-to-mid-1980s.  Most Americans remember that period now for leg warmers and Michael Jackson albums.  But it’s important to remember that it was also when radical Islam first forced its way at gunpoint into the world’s consciousness.  The Iran hostage crisis — which saw Americans held captive for more than a year — was fresh in everyone’s memory.  Hundreds of American Marines were killed in Beirut in 1983 when their barracks was hit by a suicide bomber while I sat in my elementary school classes.  And most disturbingly for an American in Egypt, in 1981, Mubarak’s predecessor as President, Anwar Sadat — the man whose peace deal with Israel at Camp David had brought me and my family to his country — had been assassinated by officers of his own army who were angry at him for making that deal.  Mubarak had continued Sadat’s policy towards Israel; nobody could say if there would be more attacks against him, or against the Americans the policy he maintained had brought there.

Even then, in other words, there was a sense that revolution — from the Army, from the mosques, or just from the streets — could come surging forward at any time, a tidal wave sweeping all before it.  And as a consequence, you couldn’t live as an American in Cairo without being conscious of the possibility that things could go very, very wrong for you very, very fast — even if you were just a kid.

It wasn’t like we lived in an atmosphere of constant fear, of course; it was more like an undercurrent, a subtext running underneath daily life.  It was the eventuality that nobody talked about but everybody tried to be prepared for.

As children, we couldn’t really understand the dimensions of the threat, but the adults around us did their best to make us ready should we ever have to meet it anyway.  If bad people break into the house, we’d learn, hide under the bed and be as quiet as you can, no matter what you hear.  If bad things start happening and you’re at school, go as fast as you can to the embassy.  Don’t try to find your mom and dad, just do whatever you have to do to get to the embassy and they will meet you there.

(The never-spoken ending to that thought: Hopefully.)

At the time, I took all of this in with what I can only regard now as surprising equanimity. Kids are wonderfully elastic that way; they can adapt to almost any circumstances because they haven’t learned enough of the world yet to tell the difference between the ordinary and the extraordinary.  When everything is new, nothing is surprising.

It wasn’t until I returned to the U.S. that I realized how deeply that part of my experience in Egypt had sunk into my subconscious, though.  The first realization came one afternoon some months after my return when my family went to the movies.  The picture we saw that day was a new one from Steven Spielberg titled Empire of the Sun.

If you haven’t seen it, Empire of the Sun is a piece of lesser-appreciated Spielbergiana, adapted from J. G. Ballard’s semi-autobiographical novel of the same title.  The story recounts the experiences of an English boy, Jamie, living in privilege in the foreign quarter of Shanghai, China in 1941.  His world comes crashing down around him on December 8, 1941, when Japanese troops follow up the attack on Pearl Harbor by sweeping into Shanghai and seizing the city at gunpoint.  Shocked by the sudden attack, his family attempts to escape from the city, but in the chaos they are separated and the boy ends up spending the war in a Japanese prison camp, surviving despite a diet so meager that he gets his protein by picking weevils out of the condemned rice his captors feed him.  His family would not be reunited again until the war’s end in 1945.

The scene from the movie when the Japanese attack and young Jamie is swept away from his parents perfectly encapsulates the kind of scenario we all feared.

(That’s a young Christian Bale as Jamie in the movie, by the way — he was 12 years old when he made it, just a year or so older than I would be when I saw it.  Which only drove the point home to me even more strongly as I sat in that air-conditioned American theater, so far from the fears I was only just beginning to realize I’d been living with.)

Of course, for me, that scenario never came to pass.  I lived out my years in Egypt more or less uneventfully, learned a lot about the world, and came back to the States to marvel at things I had last seen so long before in my short life that they seemed more like legends than reality, things like grocery stores and snow.

So maybe this piece is a long-winded way of saying nothing, really, save that the revolution that is playing out before our eyes in Egypt now is something that has been brewing for a long, long time.  (In fact, if there is anything surprising about the way it’s playing out, it’s that rather than foreigners being attacked by angry mobs fighting to topple the Mubarak regime, they’re instead being attacked by angry mobs fighting to support it.  It’s a cruel irony, given that in my time there we always imagined revolutionary violence coming from the mobs or the army against the government, as it had with Sadat, rather than the other way around.)  And none of it should be taken as an apologia for Hosni Mubarak, whose regime was every bit as cruel to Egyptians who crossed it as you’ve heard.

But I feel like it’s worth sharing anyway, because a critical moment appears to be approaching.  All the indications I’ve seen are that the next 24 hours will be critical in determining how the nascent revolution in Egypt turns out.  The demonstrators have named the day to come the “Day of Departure”, the day they launch another massive rally to finally push Mubarak off his throne; while Mubarak, for his part, has apparently become increasingly willing to use force against them rather than bow any further to their demands, turning to paramilitary bands to avoid having to ask the army to gun down its own people — an order that it’s unclear they’d obey.

As I write this, I’m watching the live video feed of Cairo’s Tahrir Square on Al-Jazeera English’s Web site; the morning has just begun there, and even in these first daylight hours the crowd is already beginning to swell.

I don’t know how this story ends.  I’m not sure anybody does.  But I’m praying that if it ends today, the ending that the new day brings is brighter than the one I learned to fear, all those years ago, so far away.

It was interesting to hear people think that a revolution could break out in Egypt as long as 25 years ago. Like the Civil War here in the US, it’s not something that just flared up in 1861 out of the blue. The conflict between the North and the South was brewing for many years prior to the actual outbreak of war.

Your thoughts made me wonder again if the “culture wars” here in the US might fester long enough and eventually lead to some kind of political upheaval (though probably much more mild than what’s going on in Egypt).

And isn’t it mystical how large events like these ripple across the globe to affect so many people both physically and psychologically?

On a totally unrelated note, it’s tough to decide where to comment now. Is it better to comment on Facebook or on the blog? What a pain it is to have to carry two different conversations. I’m gonna have to blog about this.

Wow. I didn’t know you had lived there. Very interesting perspective, my friend.