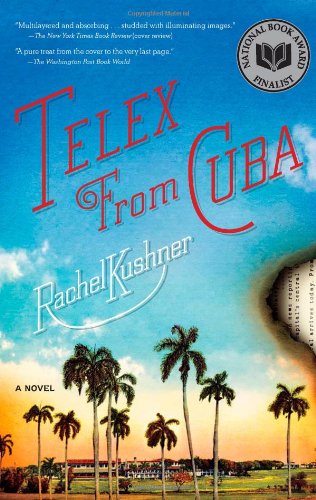 What is that dread, fearful shadow slouching over the horizon? It’s another book review! This one’s for Telex from Cuba, the 2008 debut novel of Rachel Kushner.

Telex from Cuba is an exploration of the years leading up to Castro’s seizure of power in Cuba, told from the perspectives of several foreign expatriates whose lives have brought them to the island. Among them are K.C. Stites and Everly Lederer, the young children of American executives who run a United Fruit Company sugar plantation and a U.S.-owned nickel mine, and Christian de la Mazière, an exiled French Nazi collaborator who now makes his living traveling the Caribbean selling weapons to both dictators and the rebels who want to overthrow them. As the Batista regime begins to unravel, all these characters are sucked into the vortex of its collapse, with consequences that will change their lives forever.

I’m a sucker for fin de siècle stories (gosh, I wonder why), so I found Telex from Cuba terribly compelling. Even beyond my own biases, though, there’s a lot of good stuff to be found here. Telex from Cuba is that rare novel with a true sense of place; it drips with atmosphere and period detail. The action shifts back and forth between Havana and the vast American-owned agricultural enclaves of Oriente province, and provides a convincing feeling of life in both. Making several of her point-of-view characters children allows Kushner to show us the decadence and corruption of United Fruit’s imperialist reign, without ever having to beat us over the head with it. To a child, the way things are is the way things are supposed to be, and so to K.C. and Everly it is perfectly natural that their families, strangers in a foreign land, should live in grand houses with servants and staff while natives break their backs in the cane fields at gunpoint. (Though Everly’s crush on a local boy begins to awaken her to the injustice that her whole way of life is steeped in.)  And Kushner knows how to draw strong, interesting characters, too; de la Mazière, in particular, is fascinating, a complicated bundle of conflicting motivations that could carry a whole book all by himself.

Which is not to say that Telex from Cuba is perfect. Its profusion of characters means that we don’t ever get to know any of them as deeply as we’d like, for instance. The story threads set in Havana and those set in Oriente never really come together the way you would hope they would; in places they feel as though they’re coming from two separate books. (I haven’t read Kushner’s collection of short stories, The Strange Case of Rachel K, but it looks like two of its stories are earlier tellings of the Havana and Oriente tales, so it’s possible that Telex from Cuba is an imperfectly realized attempt to join them together.) And Kushner has a habit of dropping fictional characters with the names of real people into the story, which can be confusing. Christian de la Mazière, for instance, was a real Frenchman who actually did collaborate with the Nazis, but in real life he never visited Cuba. And there’s another character, an exotic dancer de la Mazière becomes infatuated with named Rachel K, whose name, even more confusingly, coincides with the author’s own. (Kushner says Rachel K was based on another actual person, but that doesn’t cut down the confusion any.) It would have made for an easier read if she’d just changed these characters’ names while still making them inspired by their real-life counterparts.

Still, in the grand scheme of things, none of those are book-ruining flaws. And there’s so much to like in Telex from Cuba that they’re easy to forgive. So if you like period pieces or historical fiction, and are willing to work with Kushner a little bit to get past the occasional bump in the narrative, you should definitely check it out.