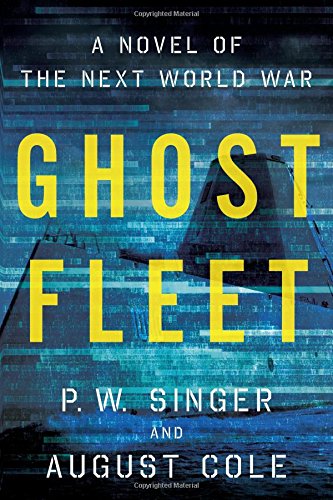 Ghost Fleet: A Novel of the Next World War, the new-ish techno-thriller by P.W. Singer and August Cole, arrived on a flood tide of warm reviews describing it as Tom Clancy for the 21st Century. After reading the book, I find myself agreeing with that assessment; Tom Clancy’s books weren’t very good either.

Ghost Fleet is the story of a big near-future war between China and the United States. The Chinese, who are bad, catch the Americans by surprise thanks to a combination of advanced technology and benighted Asiatic cunning. (This latter taking advantage of some serious real-world U.S. strategic missteps, a couple of which I’ve written about previously.) A series of reverses drives America out of the Pacific, with even Hawaii falling before the red tide. With their backs to the wall, the Americans devise a desperate, long-odds plan to neutralize China’s advantages. Does it succeed? Are you serious? This is a book written by Americans for an American audience, so of course it does.

The story of Ghost Fleet centers around the characters of… oh, why bother? Why bother putting more work into describing the series of cardboard cut-outs that pass for characters than Singer and Cole put into actually creating them? There’s the Intrepid Young Naval Captain; the Gruff Old Senior Non-com who is also the Intrepid Young Naval Captain’s father (ooh!); the Brilliant Female Scientist who is both Asian (because of course she is) and the Gruff Old Senior Non-com’s love interest (despite the two of them having literally nothing in common); the World-Weary, Cynical Russian, because in these kinds of books Russians are always cynical and world-weary; and on and on and on. None of them are written with even the slightest shred of originality or wit. They always, without fail, do exactly what you expect they will do.

This is the kind of book where the Chinese characters, who are uniformly devious and cunning, spend all their time quoting Sun Tzu at one another. Yes! They actually settle arguments that way, by seeing who can deploy the best bon mot from The Art of War, “Dueling Banjos” style.

But nobody ever read a Tom Clancy book for the characters, so maybe it’s not fair to judge Ghost Fleet negatively just because its characters are less characters than mannequins dressed up in sailor suits. The draw of the techno-thriller has always been two-fold: first, an almost pornographic wallowing in the minute details of weapons technology; and second, a plot that’s long on big, dramatic set-piece battle scenes where the author can show all that porno-tech doing its thing.

Unfortunately, Ghost Fleet falls short by these yardsticks as well. The book rolls out its fair share of bleeding-edge death gadgets — carrier-killing missiles! Electromagnetic cannons! Satellites that can track untrackable submarines! — but with the exception of the latter, it never really lingers on how they operate or what changes to the strategic calculus of war they represent, preferring instead to just wave them about like plot devices in a Harry Potter book. The result is a story so crowded with dei ex machina that they start stacking up like planes at O’Hare on the day before Thanksgiving.

Plot-wise, the book disappoints as well. It starts promisingly, with scenes of our American protagonists going about their business on what Roger Ebert would have called a Seemingly Ordinary Day — a day that’s so boring that we just know something terrible is about to happen. (In case we’re too dense to pick up on that well-worn trope, however, Singer and Cole thoughtfully start the book with a prologue in which we see an American astronaut on the International Space Station get jettisoned into space by his devious Russian colleague.) Sure enough, something terrible does happen: a panoramic attack on American forces across the Pacific by the Chinese and Russians, who have joined forces because the plot requires them to. A disaster on the scale of the World War II attack on Pearl Harbor unfolds, more or less plausibly.

Mystifyingly, however, once that new Day of Infamy is over, the book leaps ahead in time several months into the future. You would think that the days and weeks immediately following the biggest geopolitical development of the century would be pretty interesting, but not to this book, which is so focused on matters nautical that it skips all that so we can jump straight to the reactivation of the ships of the National Defense Reserve Fleet (the “ghost fleet” of the title) to fill out the gaps left by all the ships the Chinese sent to the bottom. These rusting hulks, led by the destroyer USS Zumwalt (DDG-1000) (which the book plausibly projects was mothballed pretty much right after delivery, due to its massive cost overruns and unreliability of its many whiz-bang technological features), form a new fleet. We then spend the rest of the book watching the Intrepid Young Naval Captain, who has been placed in command of the Zumwalt, argue with the Gruff Old Senior Non-com — who is also his father, remember! — over the best way to run a ship, while the G.O.S.N. bangs on malfunctioning computers with a wrench and growls “I dinna think she can take much muuuuuuuir, cap’n” in classic Mr. Scott fashion. Meanwhile the ship has also been outfitted with a super-high-tech new weapon that could change the course of the war — but only if they can get it to work, which is why Brilliant Female Scientist has come along for the ride.

Will the super-high-tech weapon work when it has to? Only a person of reasonably average intelligence could predict the answer.

There’s also a couple of subplots jammed in too, because you can only watch people bang on computers with a wrench and work out their daddy issues for so long. They both take place in occupied Hawaii: one follows a female Marine who organizes an underground resistance movement, while the other follows a civilian woman who turns into a serial killer of occupying troops and the Russian counter-insurgency expert the Chinese bring in to run her down. The resistance subplot is competently done, but completely unsurprising. The serial killer subplot feels like it belongs in a completely different book. It baffles me why Singer and Cole chose to include it; the only reason I can think of is that they thought they needed something to rope in the Thomas Harris/Stieg Larsson creepy-crime audience. Anyway, it all works out more or less as you expect it to.

There’s another post to be written about the geo-strategic assumptions of this book, and what they say about the anxieties and fears of the managers of America’s defense-industrial complex at this particular moment in history. But for now I’ll confine myself to evaluating Ghost Fleet as a literary artifact, and as a literary artifact, it ain’t very good, even with the severely limited expectations one usually brings to the techno-thriller genre.

In case the above was unclear, I didn’t like it.

More book reviews are over here, if you’re into that sort of thing.