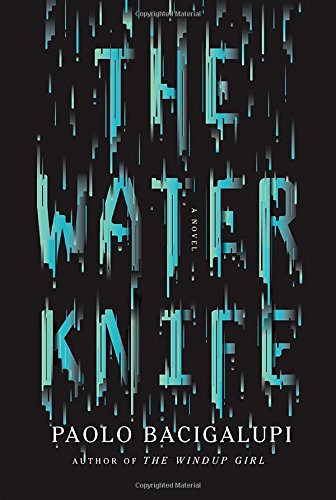 Time for another book review! This one’s for The Water Knife, the new environmental horror story by Paolo Bacigalupi.

The Water Knife is set in a near-future American Southwest devastated by global warming, where seemingly endless drought has made access to water the thing that determines whether cities live or die. The state of Texas has more or less collapsed, caught between the water crisis and mega-hurricanes fueled by warmed-up oceans; its population has become a flow of refugees desperately streaming north and west, Okies of the 21st century.  The flow of migrants has been dammed up in Arizona after neighboring states militarized their borders to keep the refugees out; its own institutions and water resources already strained, Arizona teeters dangerously on the edge of collapse itself. Its survival will be determined by who controls what’s left of the region’s main water source, the Colorado River watershed; Arizona needs its water to hang on, but so do California and Nevada, who aren’t willing to give it up without a fight.

Into the vortex of the slowly imploding city of Phoenix come the book’s three main characters. Angel Velasquez is the “water knife” of the title, a fixer and enforcer for the water authorities of Las Vegas, who aren’t above blowing up the occasional aqueduct to choke a rival city to death. Lucy Monroe is a reporter with a national reputation who came to Phoenix to write some click-friendly disaster porn but went native, identifying more and more with the “Zoners” as they scrabbled to keep their communities from following Texas down the drain. Maria Villarosa is a young migrant from Texas whose dreams of making it to somewhere safe jar uncomfortably against the realities of what she has to do just to stay alive. Machinations to tilt the balance of power in the region’s struggle for water bring them together, racing to find some kind of future for themselves amidst the chaos.

The Water Knife is an excellent novel. Much of the praise that’s come its way has been for Bacigalupi’s skill at world-building, and it’s entirely deserved; the future Southwest of The Water Knife is both thoroughly realized and chillingly plausible. It’s speculative fiction, but none of the speculations are far-fetched; they just take things we see around us every day and push them just a little further in the direction they’re already going. It’s not hard to imagine states that are already paranoid about immigrants turning that paranoia on other Americans; it’s not hard to imagine National Guards evolving from reserves for the Federal military into border patrols for their states; it’s not hard to imagine the gated communities the rich are already fleeing into becoming completely self-contained arcologies. The result is a world that feels weirdly alien and yet completely familiar at the same time, which is an accomplishment.

But Bacigalupi also deserves praise for The Water Knife’s characters as well; they’re nuanced and layered, people rather than stereotypes, and they develop in satisfying ways as the story proceeds. Angel, for instance, is a hard man, all the sentiment beaten out of him by a childhood spent fleeing from Mexican narco gangs, and as a result he brings no morality or sentiment to his work. His boss, the woman who runs Las Vegas’ water authority, plucked him out of the sea of refugees and gave him admission to a world of security and safety, and in gratitude for that he’s willing to do more or less anything she asks him to do. But as he sinks into the morass of corruption and decay that is Phoenix — and as he’s exposed to the kernel of idealism that still somehow survives within Lucy Monroe — his mental toughness changes from a simple means of defending his sanity in a crazy world into something more like a philosophy, a code. He doesn’t soften, but what at a distance appeared to be solid plates of armor start to reveal unexpected facets. It’s an interesting process to observe.

It’s tempting to say that the theme of The Water Knife is that ecological catastrophe looms over us, but that would be to confuse the book’s message with its setting. Its message is just as applicable to us today as it is to his near-future characters: that things go bad when people start putting the world they want to live in before the world they actually do live in. His characters experience this quite brutally at times; this new world of scarcity and want doesn’t hesitate to deal out punishment to those who persist in believing in old, dead gods like “Law” and “Fairness” and “America.” But the book also makes an argument that we today are just as guilty of deluding ourselves as his characters are; fattened by decades of easy wealth and steady growth, we blithely assume such things will go on forever even as the factors that drove them fly further off the rails. Faced with hard problems, we choose to pretend they don’t exist instead of accepting the pain that would be necessary to confront them. And the result, of course, is that the problems only get worse, the pain only greater, until such time as it’s so bad and so painful that they’re no longer possible to ignore.

There are a few small problems with The Water Knife. One is that, as you can probably tell from the paragraph above, its purpose is essentially didactic, and as a result there are a few places where Bacigalupi’s usually light touch turns into more of a hammering. At multiple points, for instance, characters stop what they’re doing to marvel that the people of the past knew all this bad stuff was coming, and chose to do nothing to prevent it; which is true, of course, but it demonstrates a lack of faith that the reader will be able to derive this lesson without having it stated to them flatly inside quote marks. Additionally, at times the book betrays a fear that its argument won’t be accepted on its own authority, so it starts showing us its sources in the hopes that they will lend its arguments weight. Not just content to show us that not one but two characters own (first edition, no less) copies of Marc Reisner’s sweeping history of Western water policy Cadillac Desert, it goes a step further and makes one of those copies integral to the plot itself. It feels safe to say that, if you enjoy The Water Knife and want to read more, Bacigalupi would really, really like you to pick up Cadillac Desert next. I hold no brief against that suggestion — I’ve never read Cadillac Desert, but now I definitely want to — but it’s awkward for a work of fiction to essentially stop the story to present you with a reading list. It’s a recommendation that belongs in an afterword, not in the plot.

Don’t take these complaints as a sign that The Water Knife is dull reading, though. It’s not! It’s an exciting thriller and a stark warning about the future, not a textbook. It’s not perfect, but it’s very strong, and it’s definitely worth your time.