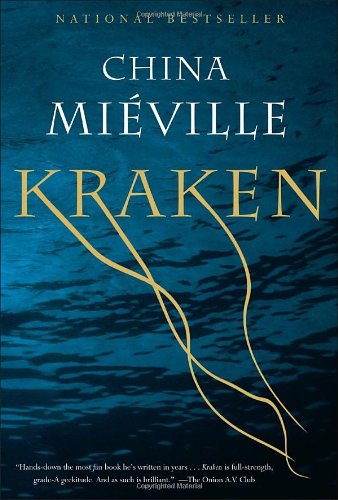 Let’s do another book review! This one’s for China Miéville’s 2010 urban fantasy, Kraken.

Kraken is the story of Billy Harrow, a specialist at London’s Natural History Museum who has worked, among other things, on the museum’s prize specimen: an enormous, preserved giant squid. One day, while leading a tour of the museum, he comes to the place where the squid should be only to discover that it has completely, mysteriously vanished. Which poses some obvious questions: how would somebody steal a giant squid without leaving behind any evidence of it having been moved? And why would anyone want to steal a giant squid in the first place? Billy’s investigation into these questions leads him into an arcane London he had never previously known existed — a London of fringe religions, paranormal police and criminals with supernatural powers, all battling each other just beyond the sight of the city’s more normal population. And as these weird elements digest the fact of the theft of the squid, it begins to appear that it it may be the catalyst that kicks off the end of the world.

I’m a huge fan of China Miéville, so I picked up Kraken with great anticipation. It pains me to report, therefore, that Kraken just isn’t very good. It feels less like a China Miéville novel than a failed experiment to see if you could breed a clone of Neil Gaiman using only China Miéville’s DNA.

Part of the problem is the setting. One of the things I generally love about Miéville is the wild imagination he brings to the worlds he builds; they’re full of strange and in some cases uncomfortable little details that make them seem to throb with life. (The most fully realized example of this being Bas-Lag, the bizarre alt-Earth that has been the setting of several of his other novels.) By setting Kraken in real-world London instead of a world completely of his own creation, Miéville lashes the novel to the mast of reality with more firmness than we generally expect from him, and you can feel the story straining against these restraints. The London of Kraken is so overstuffed with weird factions and unlikely characters that at some point you start wondering how all these people manage to keep their secret wars completely off the mundane world’s radar screens, which you’d think would start blinking when gods fight in the streets.

This overstuffed quality also points to another of Kraken’s shortcomings, namely its length. This is a 500+ page novel, and so much of that space is given over to explaining all these mystic factions and personalities that the constant explanations start to become something to slog through instead of something to savor. Miéville’s promethean imagination is normally such a pleasure, but in Kraken it actually gets in the way of the story, and in storytelling that’s a mortal sin. Perhaps if this world were presented to us in a trilogy of novels (much as Bas-Lag sprawls across three separate books) instead of just one, all that stuff would be spread across enough story for it to not gum up the works. But it’s all jammed into one book in Kraken, and that ends up spreading lore so thick that you begin to regret not bringing waders and hip boots.

There’s another problem with Kraken as well, and that’s with the protagonist, the abovementioned Billy Harrow. A book like Kraken in which the bizarre is running riot needs a strong character at its heart to ground it; but Billy is, sadly, a cipher. Nowhere in Kraken does it really feel like he’s actually driving the plot the way a good protagonist should. Instead he’s just constantly reacting to the weird stuff around him, and as a result he feels maddeningly passive, more a vehicle for Miéville to wedge explanations of the weirdness into the story (since Billy’s constantly having to have things explained to him) than a galvanic force of his own. That’s not necessarily a fatal thing — dropping an uninitiated character into a deeply weird setting can be a useful way for a writer to ease his readers into that setting — but we expect to see the character, as they learn the ropes of their new world, grow and evolve to cope with and eventually master it, and Billy never really gets around to doing any of that. (There’s some half-hearted stabs in that direction near the very end, but they never really get off the ground, which is a shame.)

Don’t get me wrong, there are things to like in Kraken. The main attraction, of course, is that trademark Miéville inventiveness, which creates a lot of moments that by themselves are fascinating and fun. But they never really come together into something more than the sum of their parts, and there’s so damn much of that inventiveness on display that it wore even a Miéville fan like me into numbness. If you knew nothing of Miéville, and Kraken was your first exposure to his work, I imagine you’d get about halfway through before chucking it aside as hopelessly overindulgent. And that’s a real shame, given the joys that are waiting to be found elsewhere in his work. (If you’re such a reader looking for a better introduction to Miéville, I recommend his Bas-Lag-set 2000 masterpiece, Perdido Street Station.)

So I put Kraken, sadly, into the “should have been better” folder. Miéville completists may want to give it a go, but for anyone else, it’s a muddle at best and a misfire at worst.