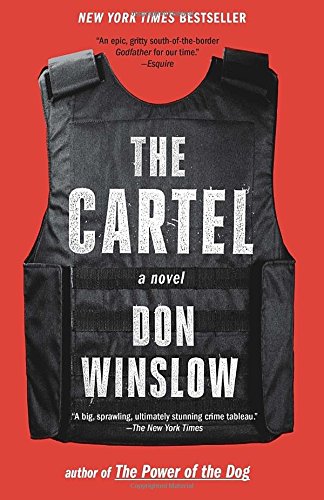 Let’s do another book review, huh? This one’ll be for Don Winslow’s 2015 Mexican narco-noir, The Cartel.

Set in the years from 2004 to 2012, The Cartel is a sprawling story of Mexico’s never-ending drug war, revolving around a struggle for power between two characters apparently carried over from Wilson’s 2005 novel The Power of the Dog (which I haven’t read). Adán Barrera is a drug lord who’s been toppled from his throne and starts the story as the king of a Mexican “maximum-security” prison; Art Keller, is a DEA agent whose obsessive quest had been to bring Barrera down.

The Cartel‘s story begins when Barrera decides he’s been in prison for long enough, and uses his money and influence to orchestrate an escape. Once free, he sets out not just to rebuild his Sinaloa cartel but to unify the entire Mexican drug trade under his banner. This ambition brings him into conflict not just with his old nemesis Keller, who comes out of retirement to try and stop him, but also with other drug gangs with big ambitions — most prominently the Gulf Cartel and their bloodthirsty paramilitary arm, the notorious Zetas. As the conflict between these factions slides into open war, characters on all sides find themselves having to decide just how far they’re willing to go to avoid losing what increasingly seems to be an unwinnable war.

There’s a lot to like about The Cartel. Winslow is a careful student of contemporary Mexico; his protagonists are fictional, but they’re surrounded by real people and actual events. (Much of the novel’s back half is driven by the debate around and effectiveness of the Mérida Initiative, for instance.) He’s able to explain the Byzantine politics and economics of Mexico and the narcos clearly and lucidly, which helps clueless Anglos such as myself understand the differences between the PRI and the PAN or the way the cartels divide up their territory. He also knows how to set up and write a good action set piece, which is why I was completely unsurprised when doing research for this review to find that Hollywood has already snapped up the movie rights. (And handed them to Ridley Scott, which makes sense. Someday The Cartel will be a very fine action movie.)

But overall I came away from The Cartel dissatisfied. Weighing in at 640 pages in hardcover, this is a book that desperately needed a more authoritarian editor. There’s enough story here to fill two or three books; trying to cram it all between one pair of covers just results in plot threads feeling half-baked or underdeveloped. We’re constantly bouncing from the central story of Barrera and Keller to side stories about a down-on-his-luck journalist or an up-and-coming rival drug lord or a grim, desensitized child soldier, any one of which could easily be a book of their own. Winslow has a lot to say, but trying to say it all at once just makes the book feel flabby.

There’s another problem, which is that (in this book, at least) Winslow just isn’t that great of a writer. He’s not bad, per se, but this is not a book from which you’ll take away any memorable turns of phrase. Most of the time his prose is competent, if workmanlike; but periodically he slips into bombast or repetition, traps a better editor could have helped him avoid.  We get that half-Mexican Art Keller loves Mexico, giving him a full page to monologue about how many great artists and thinkers and philosophers Mexico has produced just drives home a nail with a sledgehammer.

This isn’t a novel that will dazzle you with the originality of its characters, either. Art Keller is a Renegade Cop Who Doesn’t Play By The Rules™. His boss is a paper-pusher whose function is to sputter impotently about all the rules Keller is breaking. Stop me if you’ve heard any of this before.

Still, if you’re looking for action, you could do a lot worse than The Cartel. It’s not going to win Don Winslow the Man Booker Prize, but it’s an accessible story with some good action scenes and a setting with a wealth of color and detail; and odds are it will also teach you a few things about the bloodbath south of our border that we Americans have been studiously ignoring for so long now. That’s more nutrition than your average crime thriller will offer.