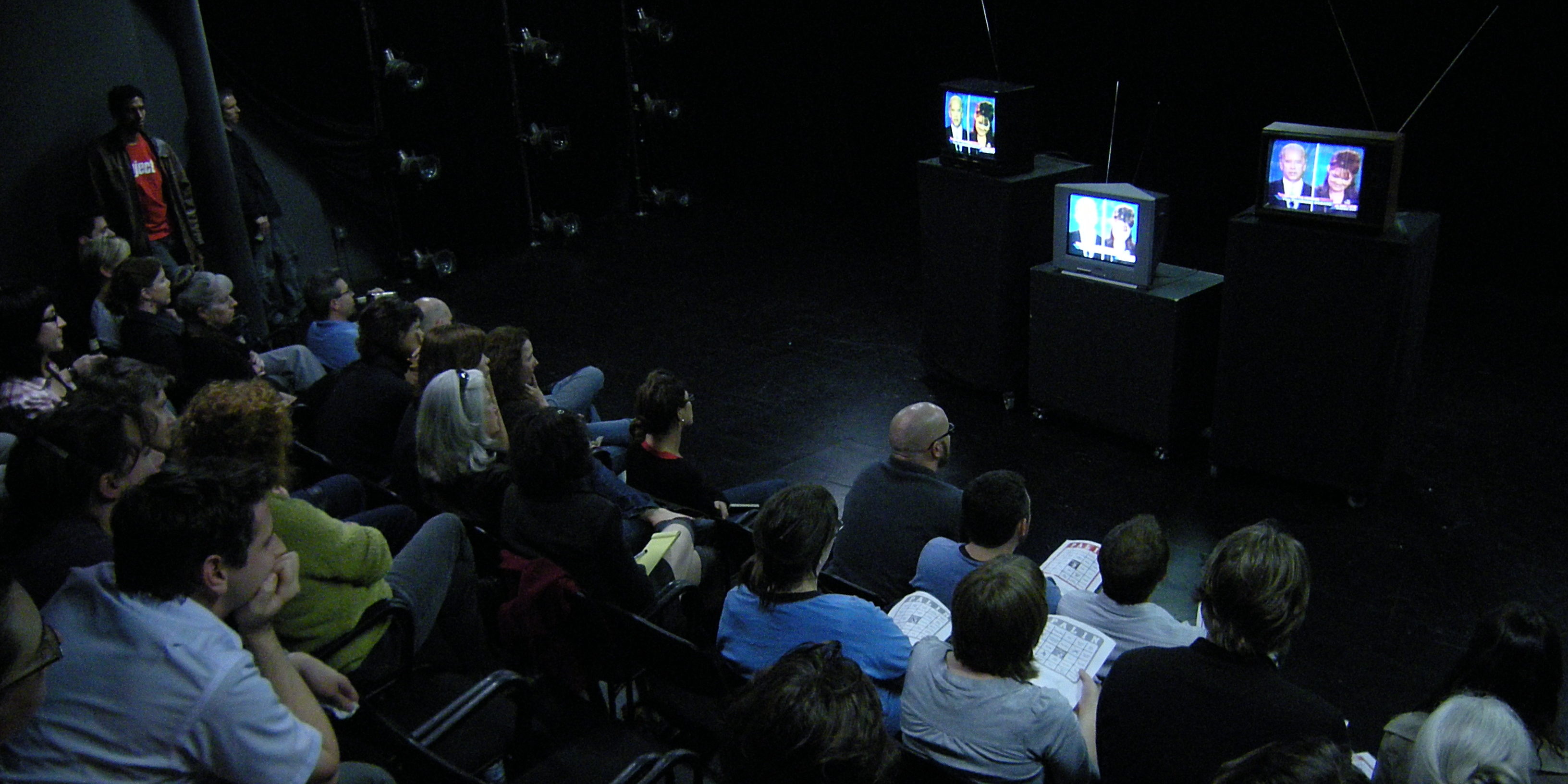 Political debates are empty exercises in style, in which candidates are judged entirely on the performative aspects of their presentation. In this format a candidate who says stupid things flawlessly beats a candidate who says smart things haltingly, or with an awkward-sounding word, or with a bead of sweat on his forehead. Ideas take the back seat to buzzwords and pre-packaged, focus-grouped lines. They provide no insight about the candidates who participate beyond how well they are able to deliver their lines, as if it was a casting call for a Hollywood movie.

Lots of people at the moment are blaming the media for this, saying that it’s the fault of the reporters who moderate the debates and the news organizations that cover them for not fact-checking more aggressively. But the media aren’t the problem here. The problem is the format, which caters to our worst instincts. Putting people on a stage and forcing them to speak in brief, timed blurts is inevitably going to favor pretty people with razor-sharp, meticulously rehearsed lines.

In other words, the problem is us.

I’ve been skeptical of the value of debates ever since I was in high school. Allow me to share a personal story that will explain why.

The Ohio town I lived in when I was a kid used to do an annual civic exercise for the students of its high school. (Maybe they still do; I don’t know.) A list of all the town’s public offices would be published, and seniors could announce themselves as “candidates” for any of these offices. A vote taken among the student body to elect one senior candidate to each office. The winning candidate for each office would then get to spend a day shadowing the actual person who held that office, learning what their job entails and seeing them go about doing it.

When the time came for this exercise during my own senior year, I decided, for reasons that I still don’t comprehend, to put myself forward as a candidate. And not just for any office, but for the office — the Mayor’s office.

Now, for the rest of this story to make sense it’s important for you to understand one thing about this decision: it was utterly, utterly ridiculous.

I was putting myself into the most hotly contested race on the ballot — there were, if memory serves, nearly a dozen kids running for mayor. (This despite the fact that our town has a council-manager government, so in actuality the mayor was mostly a figurehead; I was smart enough to know that, but running for city manager sounded boring.)

And to this competition, I brought exactly no qualifications. I was a nerd back in the days before nerds became cool, active in deeply uncool activities like theater and quiz bowl. I had no fan base, the way a star football or basketball player would; and no obvious constituency, no prominence as a leading student in an ethnic or religious community. Even as a nerd, I wasn’t distinguished; there were other nerds running with much better academic records than mine, with long histories of student-council participation and such that I completely lacked.

I was, it is important you understand, absolutely certain to lose.

I knew this as well as anyone. So why did I throw my hat in the ring? It seemed funny, that’s why. The idea of running amused me. As the kids today would say, I did it for the lulz.

Candidates were given some time before election day to campaign — putting up signs around the high school, that sort of thing — but the most important part of the process was the assembly. Just before election day, all the students would be called together in the auditorium in a big assembly, and all the candidates for all the offices would be given an opportunity to address them. Attendance was mandatory, which as I’m sure you can imagine made the assembly pretty unpopular; but for candidates it was your one and only chance to address the entire electorate. So a lot rode on it. And each candidate was given only 90 seconds to speak, meaning that your pitch would have to be whittled down to the sharpest edge possible.

Candidates spoke in alphabetical order by last name; since my name starts with “L”, that put me in the back of the pack. All competing candidates for an office had to stand on the stage together, each one stepping forward to make their remarks. I stood there as the others spoke one by one, the realization slowly dawning on me that I was about to embarrass myself terribly.

See, I hadn’t bothered to prepare for the assembly. Like, at all. Not only did I not have a statement written down, I hadn’t even given any thought to what I would talk about in general. Why would I? I was in it for the lulz; I figured I’d just say whatever came to me when it was my turn. No big deal.

But as others spoke before me, I realized that they had prepared. Like, seriously prepared. People were reading off long lists of accomplishments, reminding the audience of offices held and awards won. And I had nothing to counter them with. Nothing.

Then it was my turn. I stepped up to the microphone. The house lights shone into my eyes as I looked out onto the faces of all my schoolmates, my entire community, waiting for me to say something. And feeling desperate, because I had nothing to say to them.

Which is when I remembered the joke.

Before high school, as a younger kid, I had collected joke books. Most of them were terrible, cheap paperbacks full of things that barely deserved to be called jokes. But my brain, scrambling for something, anything, to feed to my mouth, pulled from the deep recesses of my memory a joke that I’d read in one of those joke books. And then, with a minor alteration to make it fit the situation, fed it directly to my mouth.

“Fellow students,” I began. “I want to begin by saying that my opponents” — and here I gestured to my sides, to indicate the other candidates up there on that stage with me — “are all good people. Good, honest, accomplished people.”

More silence. I dropped my voice a little, to add conviction.

“But my uncle shouldn’t be mayor of our town… and neither should they. Thank you.”

That was it; I was done. I waited at the mic to see what would happen next.

And then, dear reader — pandemonium. The crowd went wild.

After having to sit through all the other speeches, all the canned 90-second résumé recitations, I had given them something utterly unexpected: a bit of raw, red meat. A direct, dirty swipe at all the people who’d been making those speeches. An actual, honest-to-goodness negative ad.

And they loved it.

From that moment, the election was a foregone conclusion. I crushed the other candidates. Despite being completely unqualified, despite being one of a dozen candidates, I won more than 50% of the vote. All because I’d been the only one on that stage with the nerve to bring a knife, and the willingness to draw blood.

The experience taught me something about politics, but I don’t think it was the lesson the organizers of the election had intended. It taught me how deeply performative these types of staged events are; how much who wins depends on who is the best entertainer, rather than the most qualified leader.

Presidential debates are held on a much bigger scale, but elementally they’re the same thing, and we watch them for the same reasons. We watch them the same way we watch football games or professional wrestling. We watch to be entertained. And nothing’s more entertaining to watch than a clean, hard takedown.

So whenever I hear people talking about these debates, and arguing over which candidate will have the best “zingers” and which will wear the most appealing outfit and so forth, I think back to my experience in that student election more than twenty years ago. And I tremble, a little bit.

Because democracy stops being democracy when it turns on who can most effectively stimulate our base instincts. And the more our elections revolve around gladiatorial combats, the less surprised we should be to find that our leaders have a taste for blood.