Book review: “Everything Belongs to the Future” 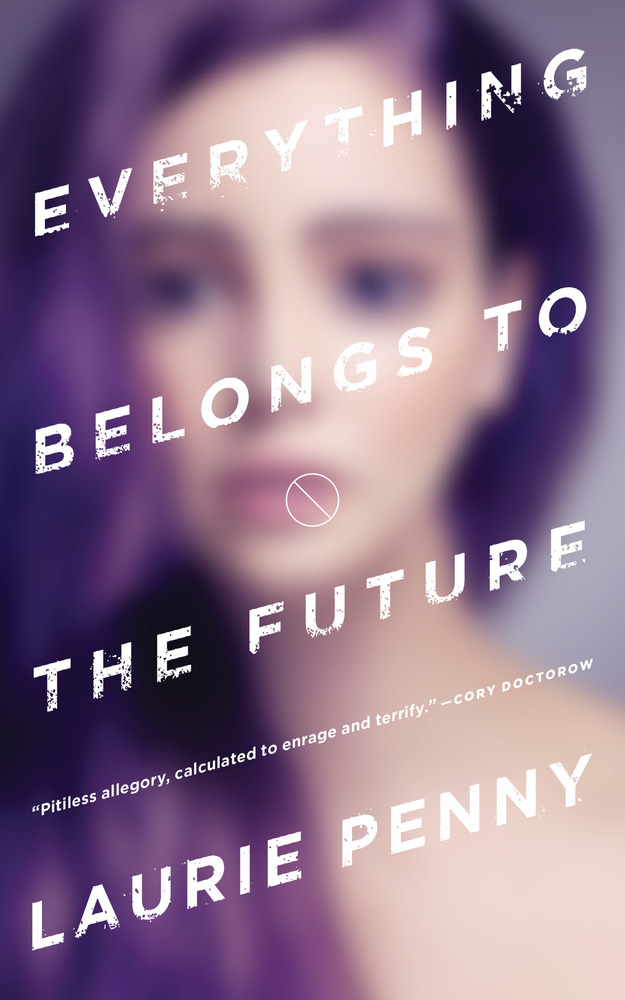 I’ve been reading Everything Belongs to the Future, an upcoming sci-fi novella by British writer Laurie Penny.

Set in the waning years of the 21st century, Everything Belongs to the Future follows several characters in a society a few decades after medicine has conquered death. One blue pill (“the fix”), taken daily, can stave off aging indefinitely, letting the person who takes it stay young and beautiful forever. But the fix is expensive — so expensive that only a privileged few can afford it. The result is a gerontocracy, in which a narrow elite live luxurious lives unmoored from mortality while the vast masses live their normal life spans in squalor.

The lives of the characters are all defined by their relationships to this system. Daisy, one of the scientists who invented the fix, has lived for nearly a century in the body of a teenager; bored, and nagged by the memory of a long-dead colleague who thought the fix should be available to all, she works in secret to develop a cheap generic version. Nina is a scruffy anarchist who lives on the fringes of society, stealing doses of the fix and giving them away to the poor, Robin Hood-style. Alex, her lover, is both a member of her criminal band and a guilty informer who sells their secrets to the corporation behind the fix in exchange for the promise of a century’s supply. Nina’s plan for a grand strike to topple the gerontocracy once and for all draws them all towards a climax in which their loyalties will be put to the ultimate test.

Everything Belongs to the Future is a novella, which is another way of saying that it’s short. I blew through the whole thing in a single reading session while sitting in the tub. But Penny makes good use of the space available, sketching out her characters with just enough detail to make them feel plausible and real. The setting she places them in, near-future Oxford in a world that’s been flooded by global warming, is convincing too. It’s just weird enough to feel futuristic, without beating you over the head with flying cars and such. Penny knows how to build a dystopia.

Speculative sci-fi succeeds or fails based on the cleverness of its central conceit, and here Everything delivers too. The only thing more plausible-feeling than the idea of a pill that can stop the clock is the idea that such a pill would become just one more lever for the 1% to use to set themselves apart from the rest of us. And Penny’s smart enough to show us that her miracle isn’t entirely miraculous, even for the people who can afford it; the weird sheen fixers’ skin takes on, for instance, or the ennui that endless life can bring when you have literally seen it all before.

If I had to lodge a complaint about Everything Belongs to the Future, it would be one that’s common to this type of sci-fi: the Big Idea tends to show up in the characters’ lives a lot more frequently than even the biggest Big Idea would in real life. In Everything’s world, the fix is all anyone talks about; it’s even the subject of the characters’ favorite music. This is a natural trap for speculative sci-fi to fall into, since exploring the Big Idea is the whole point of the work. But real life doesn’t work that way; here in real-life 2016, nobody’s favorite bands are singing about the Internet or economic inequality or global warming. (Not outside the context of the occasional do-gooder fundraising spectacle, anyway.) It’s a reflexive authorial tic that distances the reader from the story by reinforcing the idea that it’s just a story.

That aside, though, I liked Everything Belongs to the Future a lot; enough to wish that I could see these characters and this setting fleshed out in more detail as a full-length novel. So if you’re into this kind of sci-fi, this is one that you’ll probably want to put on your to-read list.

“Everything Belongs to the Future,” by Laurie Penny. Available on October 18, 2016 from Macmillan – Tor/Forge.