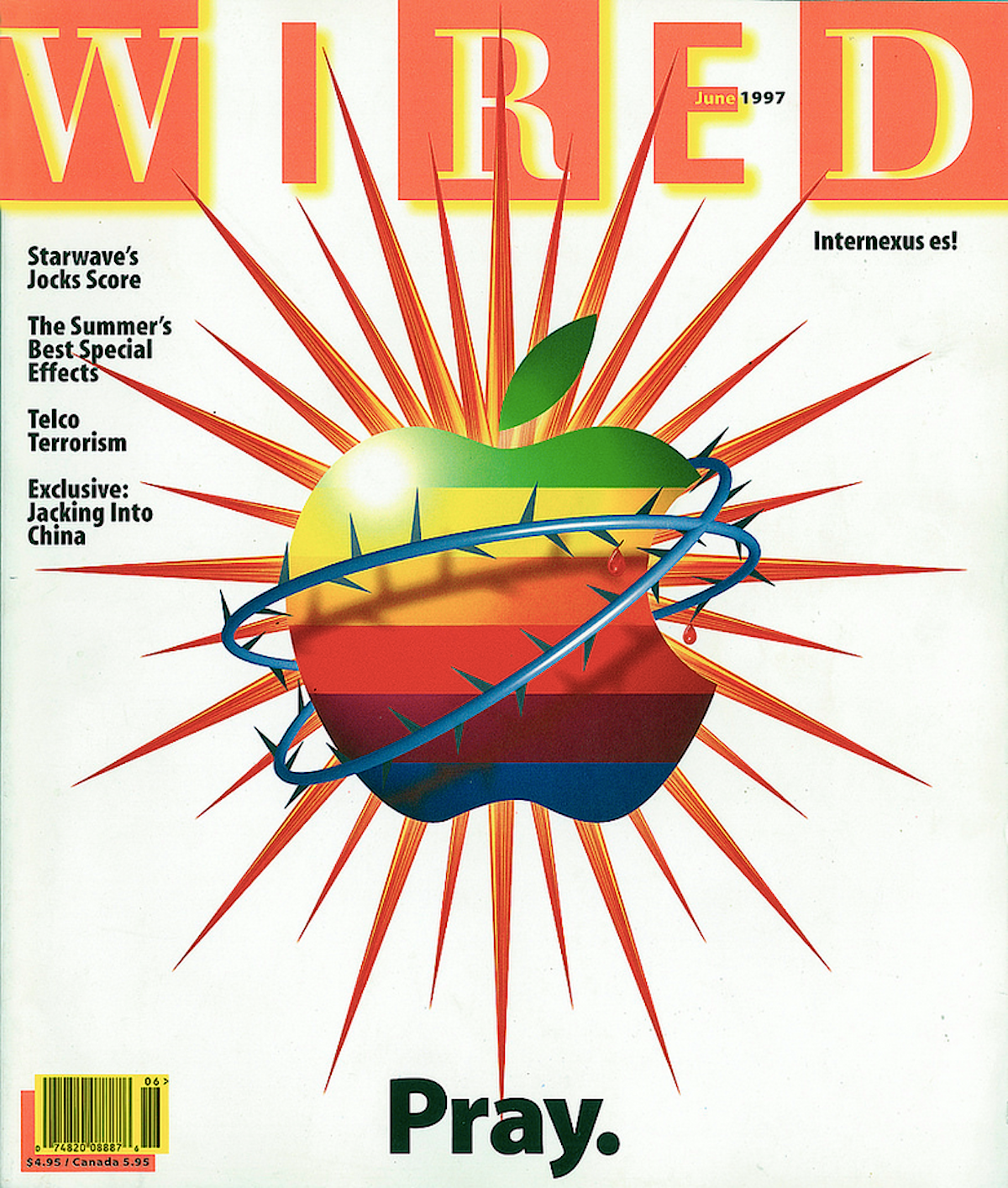 So last week Apple rolled out its newest version of the venerable MacBook Pro, and the world of creative professionals who use Macs promptly freaked out as it became clear that the revision wasn’t going to address any of the concerns over Apple’s product direction that have been simmering in that world for a few years now.

The Mac has long been the computer of choice for what might be referred to as “creative professionals” — graphic designers, artists and animators, music engineers, video editors, 3D modelers, writers and publishers, software developers. In many cases, this bond goes all the way back to the release of the original Macintosh back in 1984. These people have always been willing to pay a premium for tools that made their work easier; catering to that market is what kept Apple alive through the dark days of the 1990s, when it teetered on the brink of bankruptcy.

Lately, however, those bonds have frayed as Apple has shown an increasing willingness to ignore the things pro-level users want from their products. These users need two things: power (beefy CPUs, lots of fast memory and disk space for storage, high-end graphics cards) and flexibility (lots of ports to plug specialized hardware into, room inside the case to add expansion hardware and replace defective parts).

For most of the Mac’s history, pro-level hardware delivered those things (if at an eye-watering price level). Over the last few years, however, Apple has chosen to make pro-level Macs smaller, lighter and simpler instead. Power has mostly been stagnant — the Mac Pro desktop and MacBook Pro laptop haven’t seen significant processing increases since 2013, even after last week’s announcements — while flexibility has actually gone backwards, with ports that used to be standard disappearing and parts that used to be replaceable and upgradeable becoming fixed and soldered in place.

All of which has these creative professionals feeling abandoned, and understandably so. What’s less understandable, though, is why any of them would be confused as to why this abandonment is happening. Because Apple is a very different company today than it was ten years ago.

The difference between the Apple of then and the Apple of now can be summed up in one word: iPhone. The iPhone changed Apple’s business model forever. It created a gushing fountain of money so much greater than anything the Mac business ever produced that it was probably inevitable that Apple would stop caring about that old business and start focusing on the new. The only real questions were when that would happen and how bumpy the transition would be.

I’ve seen some of the disappointed creatives make a nod in this direction, but none of them seem to really understand just how completely Apple’s new business has eclipsed the old one. So I decided to run some numbers in an effort to help communicate the scale of the change.

Like all public companies, Apple has to perodically publish information about its finances, which means we can easily get a reasonably accurate high-level look at how its various products are doing at any moment in time. I pulled its annual reports for the last ten fiscal years (2007-2016), found those numbers, and pulled them together into a spreadsheet.

I then used that spreadsheet to create a chart showing the evolution of Apple’s business over that period. Here are the results. 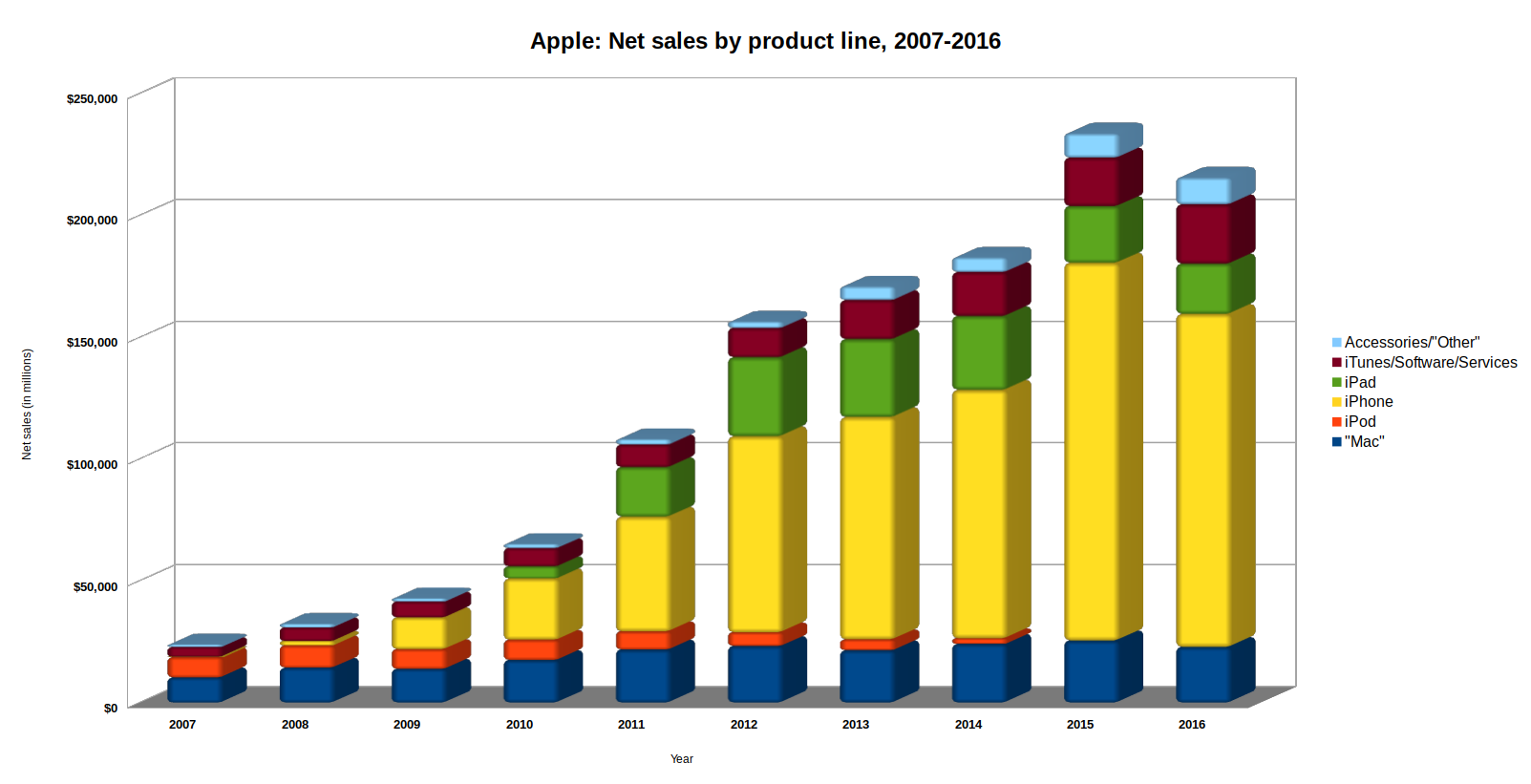 The blue box at the bottom of each column represents all Mac sales, desktop and laptop. The orange box above that is iPods; yellow, iPhones; green, iPads; red, software sales and media (music, video, apps) sold through Apple’s online stores; and light blue, accessories and miscellaneous hardware. Sales amounts are in millions of dollars.

To see what I’m talking about, look at how that yellow box changes compared to practically everything else. In 2007, it doesn’t even exist. By 2009, it’s the same size as the blue Mac box; and from there, it’s off to the races. By 2011, that one product is throwing off more money than everything else Apple sold that year combined. Four years later, it’s throwing off three times as much money as everything else Apple sold that year combined (if you leave iPad sales out of the “everything else” column, since that device is far more iPhone-like than Mac-like).If you narrow the focus to just that year’s sales of Macs versus iPhones/iPads, you find the iDevices generating seven dollars for every one generated by Macs.

None of which is to say that the Mac business is a bad business to be in. Apple sold nearly $23 billion worth of Mac hardware in FY 2016, which is nothing to sneeze at; and those sales have grown substantially since 2007, when Mac sales were only (only!) around $10 billion. Just about any other company would be thrilled to have a business like that.

But, and here’s the important bit, Apple isn’t any other company. They’re a company with another line of business so phenomenally successful that it makes a $23 billion product line that doubled in sales over ten years seem downright dowdy — especially when most of its growth happened in the first half of that decade, with sales being more or less flat in the second half.

If you find that hard to understand, imagine this: Apple splits into two companies, one holding the mobile business (iPhones/iPads) while the other takes the Macs and all the other products in the portfolio. You have the opportunity to invest in one of those companies, but not both. Look at that chart and answer honestly: which would you put your money into?

So it’s no surprise that Apple’s attention has grown more and more fixated on its mobile devices, and the consumer market that fuels their sales; or that, when Apple looks at the other products it sells, it increasingly does so with an eye towards how to sell them into that enormous consumer market they’ve tapped into, rather than how to sell them into the much smaller markets they sold them into in the past. Because the Apple that made the systems pros love has been dead for a long, long time.