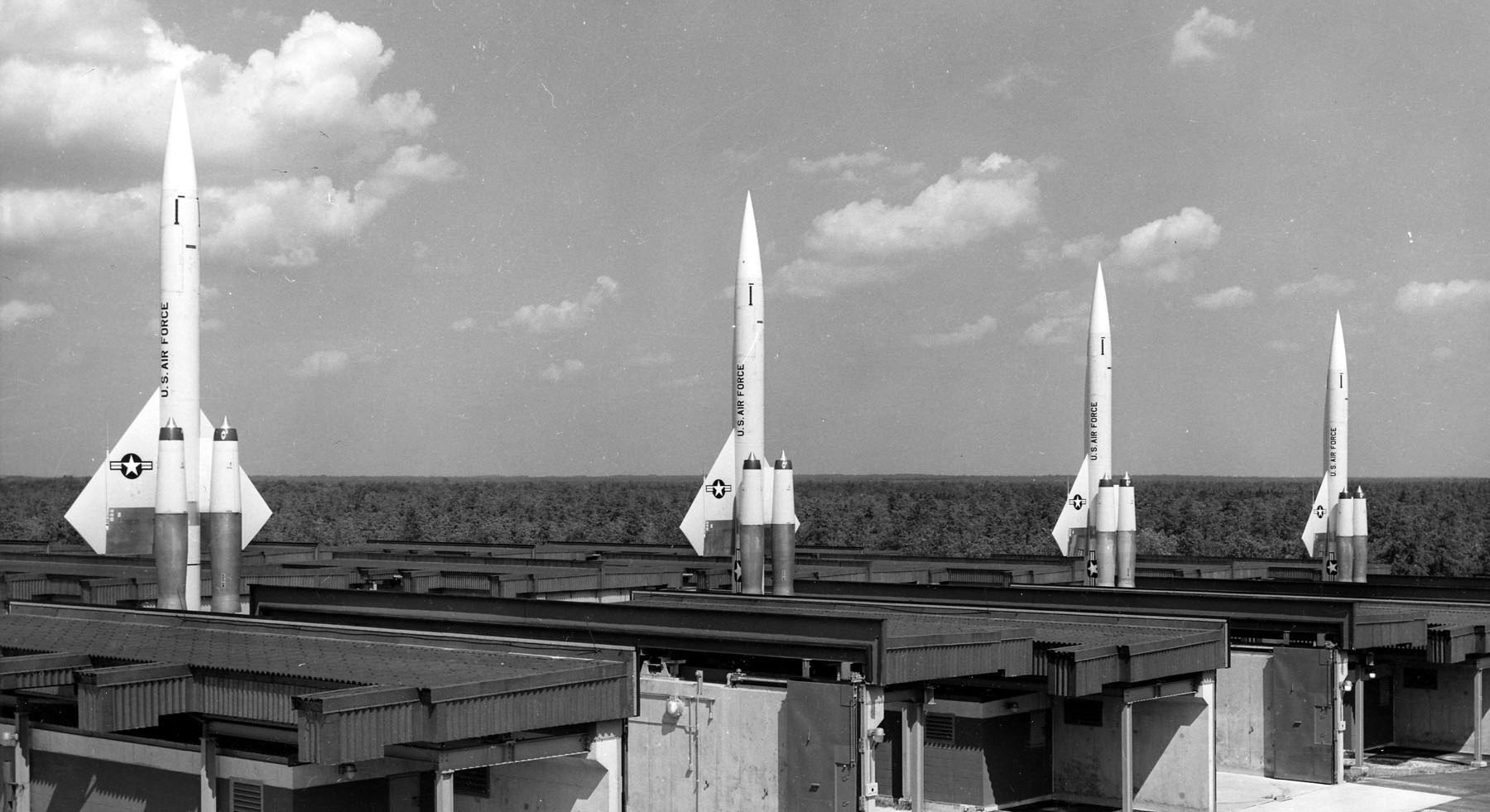 The Army was not the only branch of service planning to fight a nuclear war above Americans’ heads.

Military aviation was a part of the Army from its earliest days through the end of World War 2. At the end of that conflict, though, America’s airmen — imbued by the atomic bomb with a new sense of the importance of their discipline — pressed to be reorganized as an independent service, and in 1947 they got their way. The old U.S. Army Air Forces (USAAF) became the new U.S. Air Force, trading their “pinks and greens” for new uniforms of sky blue.

Splitting the air arm out into an independent service opened up lots of questions about where the Army’s responsibilities ended and the new Air Force’s began. Among these was the question of which service would retain the fledgling anti-aircraft missile program.

Boeing partnered with the University of Michigan’s Michigan Aeronautical Research Center (MARC) to fulfill the contract, and while the Air Force initially called the resulting system the F-99, the name that would stick came from a portmanteau combining the names of the two organizations that built it: “Bomarc.”

(The F-99 designation didn’t last; “F” was the letter used in their naming system for manned fighters, and even the Air Force couldn’t pretend that Bomarc was just a manned aircraft without the man forever. Eventually the designation of Bomarc settled at IM-99, with “IM” standing for “Interception Missile.”)

The weapon that emerged from the Bomarc design process was technically very impressive. The original production version, the IM-99A, first flew on February 24, 1955; it could reach a top speed of Mach 2.5 and carry a 10 kiloton atomic warhead out over a range of 250 miles. It combined two different engines, using a liquid-fueled rocket motor at takeoff for a quick boost to supersonic speeds, then switching over to a more fuel-efficient ramjet engine for long-range cruising.

And the technical innovations of Bomarc didn’t stop with the missile itself. The ground control system that would guide Bomarc to its targets was revolutionary. Called the “Semi-Automatic Ground Environment” (SAGE), it applied cutting-edge technology from the new field of electronic computers to the problem of missile guidance. SAGE ground stations were built around a new computer, IBM’s AN/FSQ-7, which was at the time both the largest and the fastest computer in the world. (Before the invention of the transistor kicked off the Moore’s Law-driven miniaturization of computers, a fast computer was necessarily a large one.)

The power of the AN/FSQ-7 allowed it to provide its operators with an unprecedented degree of user-friendliness. SAGE operators could pull up information on incoming targets and guide missiles to them in what we today would call “point and click” fashion, using a built-in light gun. 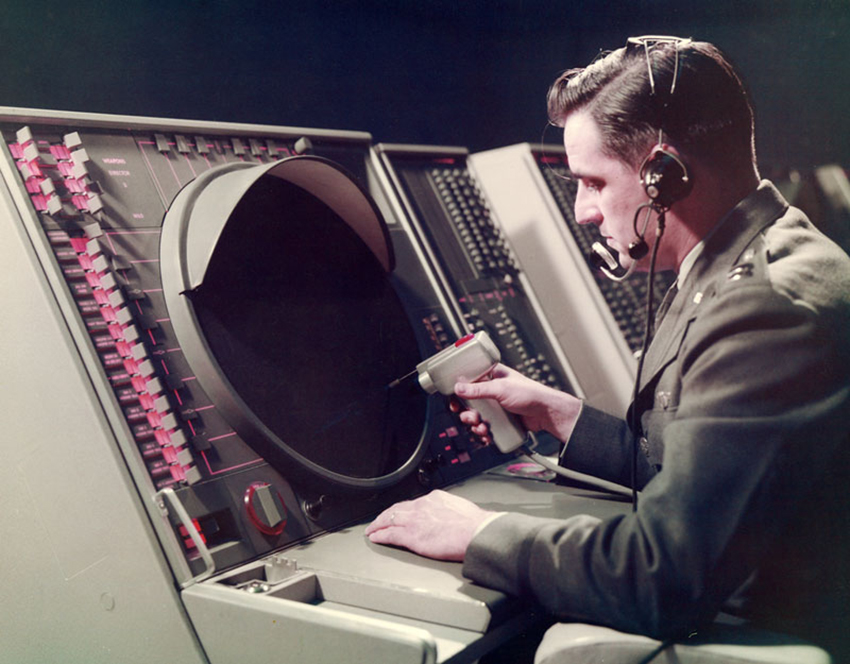 A SAGE operator interacting with his command console through its light gun. Photo credit: MITRE Corporation.

(Designed in an age when everybody smoked, SAGE command consoles also thoughtfully included a built-in cigarette lighter and ash tray.)

All that advanced technology, though, caused Bomarc as many problems as it solved. Bomarc development was slow, and the slow pace gave ammunition to critics in Congress, who doubted the need for the entire system when the Army already had Nike. This created budget pressure that forced the Air Force to continually scale back its plans for Bomarc, from 52 sites at the outset to eventually just ten. Tests of the high-tech SAGE system between 1960 and 1962 revealed that its expensive, computerized wizardry could be easily and cheaply defeated by planes scattering aluminum chaff — a conclusion that led NORAD to keep the test results classified until 1997.

Most disturbingly, as with the Nike Ajax which also used a liquid-fueled rocket booster, the IM-99A’s use of highly explosive liquid rocket fuel eventually led to a catastrophe. On June 7, 1960, a nuclear-armed Bomarc missile at Fort Dix, New Jersey exploded on the ground, scattering radioactive material and starting a fire that burned for fifteen hours. Despite cleanup procedures that included sealing up to 10 acres of the launch site under concrete, radioactive particles were still being discovered in the vicinity of the explosion decades later.

An improved version of Bomarc was eventually developed in response to these issues. Designated the IM-99B “Super Bomarc,” it replaced the A model’s liquid-fueled rocket with a new one that used more stable solid fuels; this both removed the risk of explosion on the ground and cut the missile’s time to launch from two minutes to thirty seconds. 269 IM-99A and 301 IM-99B missiles were built for the Air Force between 1957 and 1964.

The Air Force did not limit its interest in incepting nuclear-armed bombers to nuclear-armed ground-based missiles, however. It had another project running at the same time that would bring nuclear-tipped missiles to its fleet of interceptor aircraft.

The missile that would eventually be designated AIR-2 Genie began as a research project at the Douglas Aircraft Company in 1954. Unlike Bomarc, which was packed with sophisticated guidance systems to lead it to its target, Genie was comparatively simple: a “dumb,” unguided rocket with a nuclear warhead that would be carried to and launched at its target by an aircraft in flight. Once launched it would fly (at speeds exceeding Mach 3) in a straight line, which made it less sophisticated than both Nike and Bomarc, both of which could make course corrections to follow evasive targets. But, the argument went, bombers were not particularly maneuverable targets anyway; and besides, the explosion from Genie’s 1.5-kiloton nuclear warhead would be big enough that all the missile would have to do is get close.

The operating concept for Genie was straightforward. Incoming bombers would be detected by U.S. radar networks; Air Force fighters armed with Genie missiles would be scrambled to meet them; somewhere in between, the Genies would be fired at the bombers. The only guidance systems the Genies would have would be the pilots of the aircraft that fired them — a concept that greatly appealed to the Air Force, which has always valorized the pilot and viewed unmanned aircraft with a mixture of contempt and suspicion. (Which is why, in our modern wars, it was the CIA and not the Air Force that created the first armed drone.)

The relative simplicity of Genie meant that Douglas could turn it from a concept to a finished product relatively quickly; test firings of unarmed Genies were underway by 1956, and the first production models made their way into Air Force arsenals by 1957. (The midair Operation Plumbbob explosion described in the first part of this series was the result of a live Genie being fired — as of this writing, the first and only time a nuclear air-to-air missile has been fired.)

The Genie used solid fuels from the beginning, which meant it avoided the safety dangers Nike Ajax and Bomarc suffered from by using more volatile liquid fuels. But firing a live Genie posed a risk of its own; the missile only had a range of six miles, and the blast area of its explosion could cover nearly 1,000 feet, so once the missile was on its way it was imperative that the firing aircraft turn sharply to avoid getting caught up in the blast. Genies were launched from high-speed interceptor aircraft such as the F-106 Delta Dart, which could travel at speeds beyond Mach 2; Boeing’s Web page on the Genie politely describes making such sharp turns at such high speeds as “a challenging feat.”

Still, despite its limitations, the Genie’s simplicity made it a successhe longest-lived of the atomic weapons designed to shoot down Soviet bombers. More than 3,000 were produced to be fielded by both the United States and Canada, and the system was not withdrawn from service until the 1980s.

Tomorrow: the end of the atomic interceptors